t was touch and go whether we’d get enough crew for a session but right before 7:30, the roster filled out. Some us took early trains, some of us had to wait for later trains, and some of us sat and chatted. And from the central table, many an amusing story was recounted.

I picked one right off the bat – I’d given a buddy my Zanesville Turn but did the next best, a shakedown run of an express parts train from Mingo Interchange to the LeVasseur Plant. Brought over the cars, pushed them (racks and then long boxes) in two cuts up the hill. Piled everything outbound into my cut for a brake-set slide down the hill. Met the Zaneville Turn and pulled a slick move where he pulled past me and onto the drill track, then I occupied the industrial siding. And once a passenger extra swished past, I ran around my cut and was away. It was a fun cooperative move and gave me one of those highball glows. 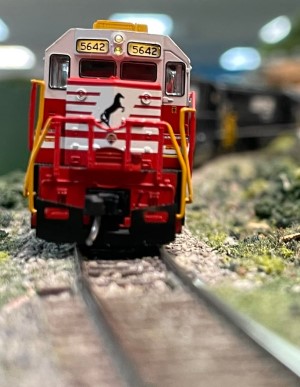 But by then I was late to run my main train of the night, 244. Climbed into the cab, called for the warrant and got rights out. Of course, there were two other trains holding up the line for me. But suddenly someone called for a helper. So there I was, standing in the staging cave, warrant in one hand, throttle in another. I ran over to the central table and asked if someone could help push 247 up the hill. Everyone looked at each other. Then they looked at me. Then they looked down. And shrugged.

Are you joking me?

It was Chris, one of our new guys, who agreed to attempt the dangerous task of shoving a train up the spiral from behind the caboose with helpers. Honestly, I didn’t think they’d make it. But I guess they did. I went back and got the brakes off 244 and expedited (at track speed) for Martin Yard. So the railroad was running again.

Later in the run, I had to tack on helpers to get 244 out of Pittsburgh. We’ve got a room full of guys, only half of them running trains. I needed a crew. But you know what I’m going to say, right? So let’s do it.

My run was pretty tense. I’d been delayed so long with helper negotiations and listening to the Battle of Midway, I had 298 riding my ass through Harris. But yes, chopped off the helper at the summit and rolled down on dynamics to Lehigh and Calypso. I didn’t think we were going to run 271 that night – so many stories to recount – but Chris again stepped in. And I’ll say this – he was game to try to pull freight up the east slope with Pennsy steam. Since the dispatcher no longer had any conflicts for his shift, he came out, neatly stepping around the Table of Storytelling, and ran helpers to boost PRR-headed 271 over the summit and well on his way.

Overall, we got everything run. It was busy and I’m going to need to train some people on problem-solving methods. But we ran everything except two passenger trains; it was a good night, we had a great time. And from the central table, many an amusing story was recounted.

>>BOOKS HERE, INCLUDING MANY AN AMUSING STORY<<<