ome nights hosting club ops, you got to be all in.

Like, driving rain so a lot of members didn’t come out. But we were filled with guests. Then the phone system went out. Then Bob Martin’s back went out. I thought I was going to black out. A couple of members looked at the confusion of the crowd (about a quarter of them were visitors) and said I should dispatch instead of the kid. So in all the madness, the mud and the muddle, I’m standing there looking at the call sheet where I just put my name in the dispatcher slot, thinking about if I should do what was practical or what was honorable.

So I went with stupid and let the kid dispatch.

Actually, he did okay and moved the railroad. I didn’t see any overall delays – generally I could pick up a warrant after waiting for the current caller to complete. Of course, there was the one cornfield he didn’t tell me about, the one I heard about later (a brown Pensy passenger train, burning in the ditch, pity). But overall, yeah, he got things across the line.

Of course, this gave me the chance to run as well. I hooked a guest (and God forgive me but I forgot his name – it was that sort of night). Still, a superb run on the Mingo Turn, using every second of time-expiring warrants and every inch of drill tracks. We worked up to the interchange, back to the industrial site, in and out and around, then some quick sorting and home. After that, we ran coal from the Weirton Docks back over to the mine at Carbon Hill – not such a short run when it turned out my little geepy-gaspers couldn’t lug the hoppers around the tight river curves. So of all things, we had to call helpers down from Harris to pull us all the way over to Carbon Hill. Then I watched a visitor run a really cool PFE block around the layout – sweet.

As if my night wasn’t full, when I left the fun really started. Don watched me lock the gate. Then he drove off. I got in the car (and out of the rain) in time to see a SUV coming west on Cheney, left signal on. Apparently her windows were fogging and she saw my car and assumed I was on Sherman, and made a neat little turn around my hood and drove right into the ditch. The two girls were okay, but we couldn’t shift the car out of the ditch. Eventually we got it sorted – they had AAA and were in the midst of calling for a wrecker when a nice fellow in a big truck asked if they needed a yank. And yank he did – out came the SUV so I guess there is something good to be said for such monsters. So yeah, I was soaked and tired, but still smiling from a good session. Whew.

>>>I DON’T EVEN KNOW WHAT TO SAY ABOUT MY BOOKS EXCEPT THAT I DID THOSE GIRLS A NICE FAVOR, SO DO ME ONE AND BUY A BOOK! PUULLLEZZE!<<< 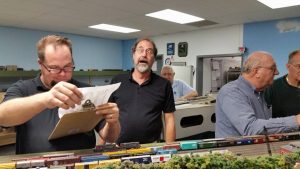