he two GP-9s of the Mingo Jct Turn rumbled out of Martin Yard at 2am. I knew we had a lot to pull from the industries since nobody ran locals last time and the spurs were packed. I guess that’s why I got assigned extra crew on this run (namely, Tom and his son Braden, who really knew how to handle trains well). Braden had expressed interest in operations and I told him he was getting it in spades tonight – we had a very tricky run. Lots of switching and lots of puzzles.

But the father and son team did well and I just pointed out considerations and uncoupled an occasional car. The session was packed and a parade went through Mingo while we worked. 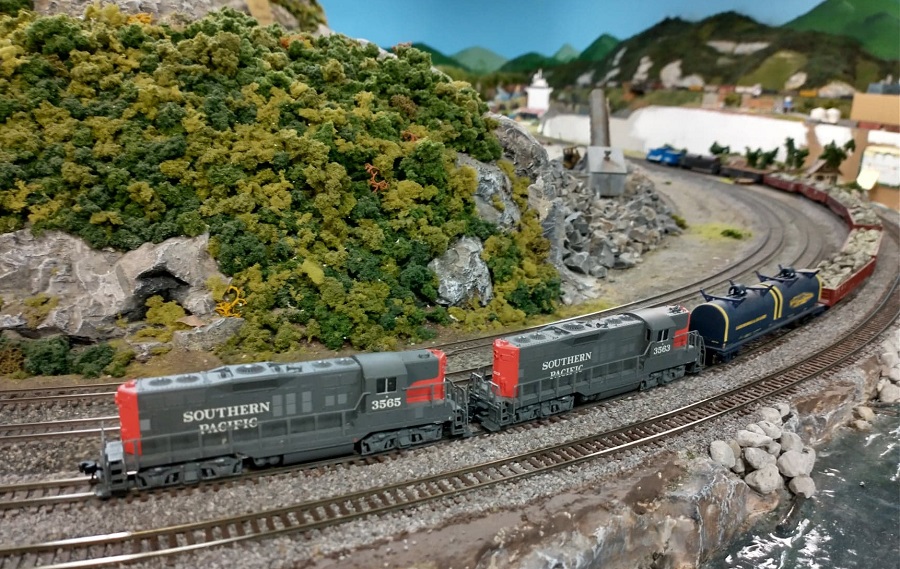 The Mingo Jct Turn comes in with its first cut of the night – loads from the quarry!

Interesting to see Shaun taking the Shelfton turn, and Terry rolling past on a coal drag. We had something like 19 people there, all masked and doing their best to distance. It was a lot of fun.

Special mention must go out to young Matt who is leaving us for a job in Huntsville. He came to us years back and a kid, learned to railroad and finally took the high job, dispatching. And yes, I’ve kicked his ass on a number of blogs where his dispatching went south. But tonight he ran the session perfectly, passing out warrants and hardly delaying anyone. Overall, the pike ran as intended, everyone had a good time and I got to show a young man how to spot freight cars. A great night at a great club.

Thanks for the great session, guys! And good luck, Matt!