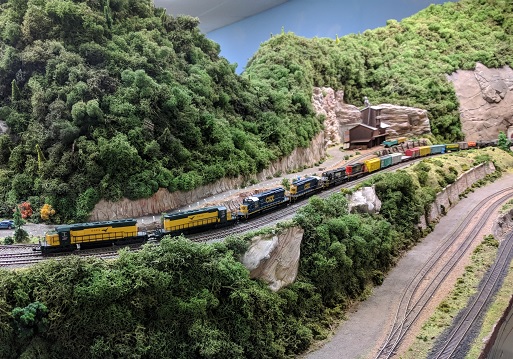 o I’m rolling out of Calypso Yard on the head end of 271. I didn’t bring enough power to run a westbound freight so I’ve got loaned Funits on the head end, ATSF units as round and yellow as a jar of mustard. And I’m rolling slowly, mainly because a turnout in front of me broke a while ago and I’m having to tip-toe a forty car train over it. And this is made worse by the fact that, instead of helpers, I’ve got a turn coupled on the back, pushing. My caboose crew is screaming as their frame groans, I’m twelve hours late and the dispatcher is looped out on pain meds. Can it get any worse?

So, yeah, rough session tonight. I already built up my fears; one guy at dinner. Everyone else late. Nobody at the club. Then people started showing. More people and more. Cub scouts. Visitors. Old members. And suddenly where there was famine, there is feast – too many! – and I’m tour guiding while my Weirton to Carbon Hill run idles unrun. And we’ve got a new dispatcher, and if he wasn’t on meds when he started, I’m sure he’s dropping meth now. Trains were crazy late and I was running with a kid who’d never even heard of ops (but he got really into it as I let him figure out the moves). Total chaos.

But you know, you hit a point (especially when you’re grinding up the hill with this Frankenstein monster – two trains grafted together. Sure, it’s weird, but it was also fun. I glided down that long hill from Harris Glen, just an absolute delight. And the new yard was a pleasure – Sparky was switching down one lead while I did my setouts on the other. And then the river level route, winding along those pretty hills on my way to Cincinnati. Sure, I didn’t get in until 6am the next day (eighteen hours after I started) but the running was fun.

And we’ll keep working on this massive layout to make it better.

We’ll get it right eventually.

For now, DS, hand me a couple of pills.