ou’ve heard of the famous “Day of Infamy”, right? Well, at Orlando N-Trak’s October session, we had our “Night of Irony”.

There was that moment when a heavy freight, overloaded with motive power, told the helper crew who offered assistance to bug off, only to flounder on the hill. Had to chuckle as I wrote the warrant to get the extra units up to shove him over the summit.

And then there was the member who runs locomotives as one of his many livings, who made a dying out of misreading his issued warrant and pulling out in front of another train. If anyone wants to run against our seated president, this could be an election issue.

Overall, it one weird night. My road-rash was itching and my bandages slipping. I had to hold two gallons of pee with my pelvic floor muscles – no time for a wizz-break. The clock went nuts and ran too fast (Suddenly it was end of session and we were knee-deep in trains). Martin yard is a bit scrambled when we looked at it post-ops. 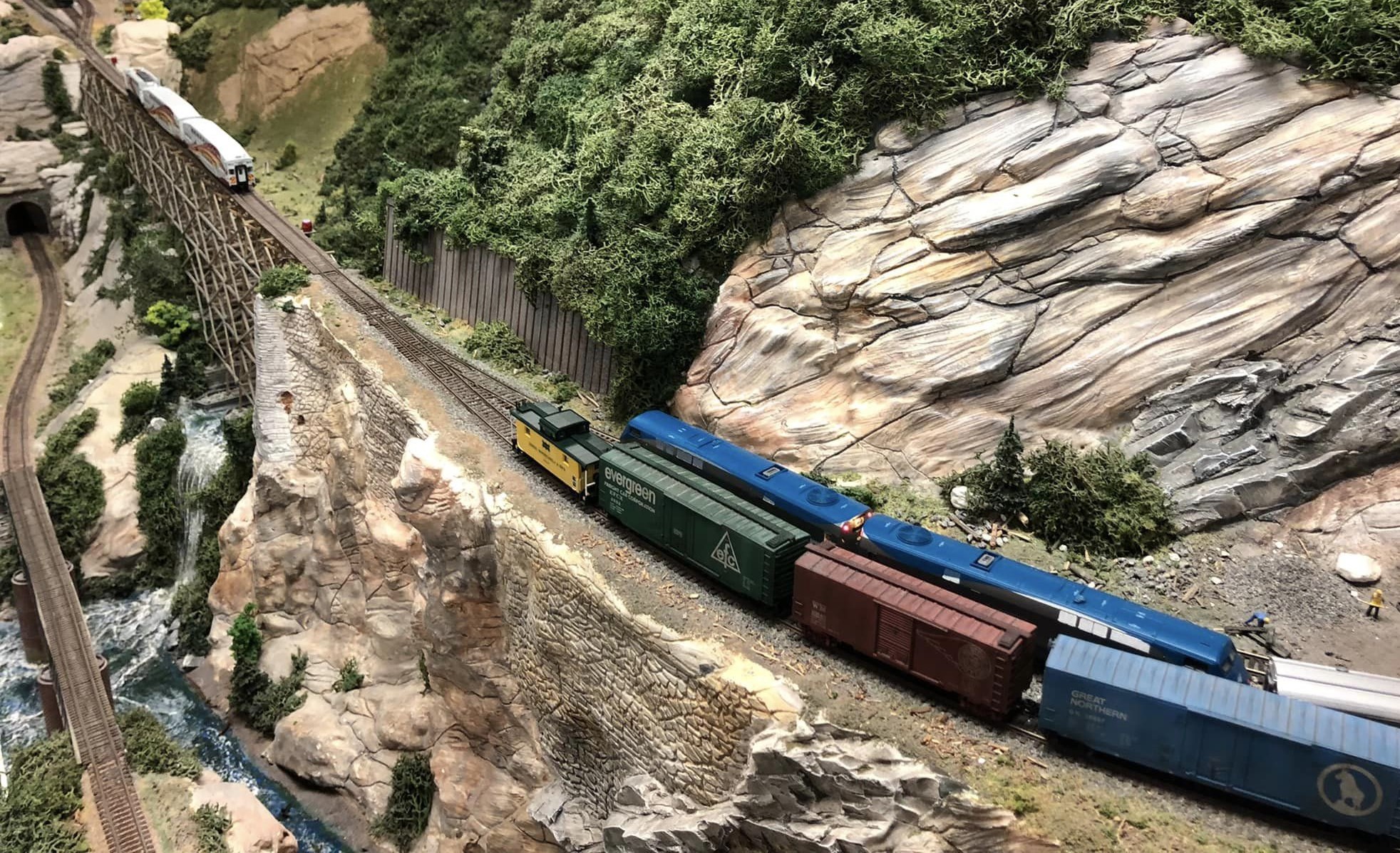 Four trains (a local, a freight, and two Silver Bullets) attempt to get past each other in the tight confines of Harris Glen (Photo: John DV)

For me, we had  real confusion on the hill near the end of the session. Tried to get two trains up to Red Rock to meet two downhill trains. Turns out they wouldn’t have fit. But fortunately the young guys on 298 ran ahead of the ore train (which they were told specifically not to do). And the ore train went to ground in Pittsburgh. I actually had to come out to see what was going on. By then, 298 had overrun its authority and was attempting genocide on passenger 97, which distracted everyone from the fact that I would have locked the railroad had the move unfolded the way I’d planned. I quietly thanked Chris for holding 552 downline and pointed my finger – here, here, and hold here – to get things moving again. 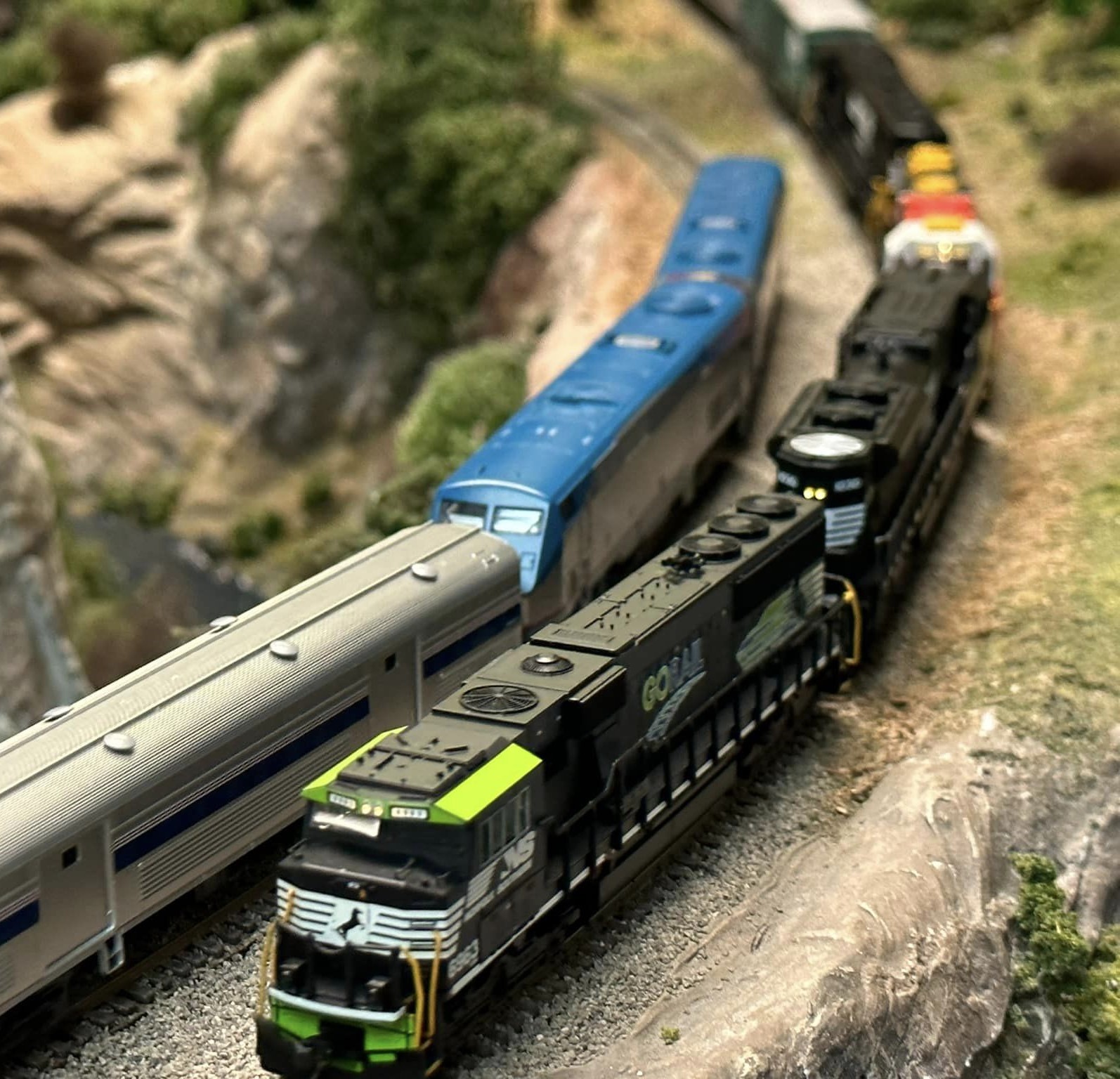 On the good side, we actually ran the connection of the Nazareth Branch with the mainline, and got log cars shipped out of Calypso as intended, bound for Martin Yard (Zack and I will have to walk the tracks that way to see where the loggers actually ended up). So yes, there is always something new going on in our session.

So we ran everything on the roster except one passenger train and three and a half mineral trains (the ore train ran short, since its engineer was optimistic of how much ore a single switcher could haul).

The MOW crews have a new list of turnouts needing fixes. But everyone seemed to smile and some people tried new jobs (if only I could lure someone back to the dispatcher desk. I feel like the guy working the morgue – who wants my job?)

But a great session with the guys. Even with all the hi-jinks, near-misses and dangling participles, we got most of the freight to its destinations.

Well, a good deal of it, anyway.

OpsLog addendum: I was pretty tired by the time I limped (literally) home last night. However, I just wanted to say this:
Yes, N-scale is difficult to run sometimes. Yes, our cars are troublesome, badly-weighted, with various wheel and truck problems. Turnouts, yes, issues. Yes, the track was dirty. Yes, the room is crowded, the quarters tight, and there were long delays in some cases.
But we ran that layout like champs last night. Everyone did their jobs and everyone moved their trains. No other club can do what we do. So yes, we have another amazingly successful session last night. Thanks to all who could come out and attend.