ou know it’s going to be one of those operations nights. There were only a couple of cars in the lot when I arrived. Before we started, a freakish mishap disabled our water supply (and I had to grope my hand in icy water for that shutoff valve). Then the confusion of getting everyone assigned to trains and getting everything set up. Finally, the clock was hot and I was out of the yard with Mingo Local, running sharp for my industrial area.

All sorts of problems there. Turnout issues. My engines were whining (sounds like a bearing is going dry). I had a lot to move and didn’t seem to get on top of things – it was a real scattershot mess. A lot of times, I was using my long reach to rerail trains on that damned Red Rock approach.

But after all that, everything still dropped into place. I hadn’t noticed but a lot of people showed. We were thinking we might run half a session in November and finish it in December but it turns out all the freights ran (usually I have to take one of the last ones out and beg someone to take the other but not this time – they were all signed up). And not only did I get my turn in, I even got to run two more extras (a coal run from Carbon Hill to the Wierton docks and the first ever run of the cement train out of Nazerus over to the docks, too). It was a lot of fun. More than I initially thought I’d have. 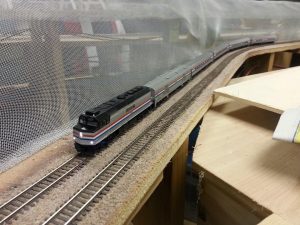 Oh, there were still some gripes. The dispatcher (a young member) was doing fine, but everyone hates the dispatcher so there was the usual bitching. And a layout this massive and old has its faults (most of them under my wheels – our maintenance crew has been distracted by reality as of late). But really, we ran everything minus two passenger yet plus four extras, so a net gain. Everyone had a good time, a lot of the crew stayed late, and it reminded me why we do this whole thing in the first place.

So Happy Thanksgiving, guys. See you for the Christmas session!

>>>TIME TO START THINKING ABOUT STOCKING STUFFERS. WHAT BETTER GIFT THAT A GOOD BOOK. AND I HAVE A COUPLE HERE – HAVE A LOOK! FOLLOW THIS LINK!<<<