kay, this blog was mentally pre-written. We were holding our session the day before Thanksgiving because our college guys were back in town. Matthew wanted to dispatch. I already had most of the blog written in my head, about how he screwed up, how trains stacked, how we were running things twelve hours late.

Actually, Matthew ran perhaps the best session we’ve ever had with a guest dispatcher. I didn’t hear phone delays. I didn’t hear horseplay. Nobody died. What I did see was a railroad that went through its paces. Good for our division. Bad for this blog. But good job, Tide.

So I was going to run Mingo Turn. I’d tinkered with my freight program and ended up with an imbalance – five cars to the other two locals and 20+ to Mingo. It was a nightmare. And since it was my fault, I’d run it, horrorshow or not.

Not. Actually, most of the cars went to the interchange. With those out of the way, the rest of it was indexing into City Oil and Hender Paper. And when I put it back together, I ended up with cars correctly indexed for outbound tracks. This was just random dumb luck. Actually, it was an easy run, nothing to write home about. And nothing to blog. 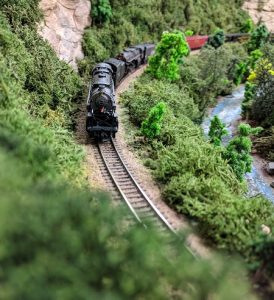 After the turn was back in the engine house, I looked at the crew call. All the freights were out – nothing was left. Up at Harris, the two helper sets were idling. Bruce was going to run one set down the western slope to Martin. I figured I’d take the other set down the eastern side to Calypso Yard and put them away. Matthew cut me a warrant sharp and I glided down the hill on restriction, following the final eastbound freight. Got into Calypso in time to find young Craig (steamhead and recovering hockey fan) coupling onto every hopper car in the world with double ended steam (so pretty). I didn’t think he’d make Hellertown with that load, much less the Summit at Harris Glen. So we agreed I’d cut in. This evening we were trying to run helpers at mid-train to see how they handled. So I dropped in about, I dunno, twenty cars back. He blew twice to move, I advanced my throttle and felt the train buck. Shit. No way we were getting these up the hill, not with steam on the head and a pair of willed-to-the-club C&NW diesels. So a quick call to the dispatcher and now Bruce had paper to bring his heavier LM&O monsters down to Hellertown to meet up. We rumbled in to find him a quarter mile out. After some discussion, we decided to slap him onto the front of our steam.

So, on the head end, two big motors coupled to two heavy steam engines. Then about twenty-five coal hoppers. Then my units. Then another twenty-five or more hoppers. Two helper sets – this was a first. We all looked to each other and advanced our throttles. Slowly train 415 picked up speed, edging up the long slope.

It’s a twisty route up the grade to Harris and the crews were watching their couplers, trying to balance the loads of this very heavy train. Good so far, not so much as a wheel drop, but we still had the spiral tunnel just before the summit. And here’s where it got tricky – you could only set your throttle as you went into the 300 degree round-the-loop tunnel, sight unseen. We held out breaths (particularly me, jammed well back on the consist with steam and diesel fumes filling the bore hole). Anyway, happily we popped out into the bright florescence of daylight, all together. Rounded the high turn at Harris where I dropped off. Got paperwork down (and passed the Harris Glen local just coming in to work – man, we ran everything tonight). Heard that Bruce dropped off with his power at Martin and now on the river route, Craig ran smartly back to the mines at Carbon Hill where he put everything away nice and neat.