agle Day – that day in 1940 when the Luftwaffe, desperate to end the ongoing areal Battle of Britain, threw everything it had at the Isle. And everything the English had, every fighter, was up. As Park replied to Churchill’s question of reserves, “There are none.”

So that was last night. Never has ops been such an impressive effort with so many trains running. Overall, we didn’t finish until after 10:30 (3:30am on the fast clock). And we ran everything. Every damn train we could run made it over Harris Glen. Six freights, four passengers, three coal drags, a cement train, and a TOFC. Additionally, there were a couple of helper moves and four locals. And through it all there were no serious failures of the system. The clock got an error shortly after the start but I cleared it on the fly. All in all, we burned through 103 warrants which is a new record.

I started the session in the dispatcher’s chair, knocking out seventy-five warrants by 1pm. My best move of the night was meeting the Silver Bullets at Harris Glen with two coal drags lugging in the wake of the eastbounder while the Harris Local standing by. Yeah, Harris was packed. The locals kept busy and out of trouble, the passengers ran about an hour behind (not bad, considering the traffic) and I was writing at a furious rate. Had a phone call come in from my cycle wingman in the middle of the heavy moment – was in mid-warrant and he was explaining why he couldn’t ride. Told him, “Understood” and hung up. Yeah, the DS office was busy.

But (and I know at least one person who is cringing at the B-word) the second half of the session had its own moments. That’s when our off-to-school-and-home-for-yule kid came back. We missed him, and it was good to see him again. But yes, while he has been scholastic and enthusiastic and dedicated and committed, he was also rusty. So I turned over the railroad to him, which was currently running like a mid-race greyhound, panting and eager to dash. Told him “This is here, this is going here, the helpers are on this train, this train has orders to expect them, and the locals are both active in their industrial parks.” Got out of the seat, coupled up a couple of woefully underpowered SD-9s on the front of heavy 271 (westbound freight), and found myself holding (next to westbound 97) for a train miles away. Uh oh.

Yes, uh oh indeed. Things went downhill from there (which always improves my stock as a dispatcher, so thanks for that). Long hold out of Bound Brook. Longer at Calypso. Got my first order voided. Finally made Harris and got three orders voided, one after the other. Found myself meeting another freight there (which is about the worst thing you can do in this little simulated worlds – because life is difficult, love is eternal, but freight trains are long and Harris Glen siding short). Watched a freight claw its way into the Glen and grind down the rails next to me. And finally they were in, with six (scale) feet to spare between the caboose handrails and the turnout fouling point. Then I was spanking down the long grade, happy to be rolling (and kidnapping the helpers, since the DS forgot to order them off). Carried them all the way down into Martin Yard where an angry yardlet got snappy with me because he wanted to shut down and go home and I was running late (like, what, you think it was my idea?). And in real life, what’s the bloody rush? You’re retired. You get to sleep in. I’ll be on a bike riding in to work in six short hours. But that’s beside the point, ya pain-in-the-butt Jarhead. And you spotted local cars on the wrong end of the yard anyway. So, piffle.

And something I’ve never seen before – a crew stuck on a siding went to beans. Literally. Well, not literal beans but the waiting (and hungry) engineer set down his throttle, went out to his car, drove over to Wendy’s, came back with his order and returned to the siding with his grub. And yes, the dispatcher didn’t even know he was gone. This translates to at least a three hour wait for paper.

And where would we be without reintroducing our old pal Doc to operations by incinerating him in a tunnel, when his intermodal train slammed into up-bound helpers (the helpers I’d carried off to Martin) in the dark. And their lapping warrants went up in the burning hell that ensued. So, yes, the perfect end to a perfect shift.

But overall, the layout ran smooth, the trains ran hot, and a lot of people had a lot of fun. Mission accomplished.

>>>WHAT BETTER WAY TO CLOSE OUT THE PERFECT SESSION THAN TO OPEN THE COVER TO THE PERFECT BOOK. AND HERE’S A COUPLE OF MINE TO CHOSE FROM!<<< 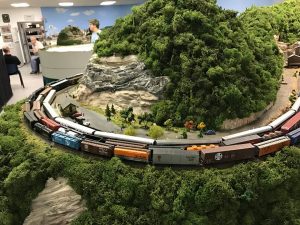 My 271 in the foreground, just fitting (photo:Matt Linder)