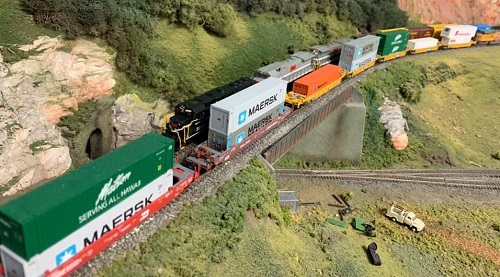 ake a good look at this picture.

This is Red Rock, a siding in the middle of nowhere on the western flank of the Appalachians. It’s full of trains.

If you follow the rails east to the opposite flank, you’ll find Lehigh siding. It was really fulla trains. I think at one point we had six pushing down that furnace-side main-siding combo.

We had a full, full house – guests and new members and visitors from England and, who knows, maybe a Martian out there. In the course of the evening, we ran every scheduled train and a load of extras – twenty movements all told. I wrote ninety warrants. Bob K sat back in the office with me and I don’t think I’ll see him again – he ran off screaming halfway through.

Yeah, the railroad was packed, made worse by the disastrous ascent (and not much better descent) of 223 which suffered everything possible a train could suffer. All in all, it took him three or four scale hours to get over the top at Harris. This meant that all the trains I latched to do things after him got stuck. So the session compressed and all the moves bunched up on either side of the mountain. At one point, I was fleeting them through, three or four at a time.

We also had a train pick up another’s running ID (never seen that before). The next thing I know, I’ve got two Extra 87s. So I’m talking to one 87 live in the office and another one is one the radio. Nothing like total freaking confusion while the radio is crackling, the line is packing, and my anus is quacking.

Anyway, nobody died and eventually all the trains ran across the summit. I don’t think I’ve ever seen the board that full before, a total mess.

I remember way back when – how I’d come out of the office and say, “Hey, I have a couple of trains that need crews. Can someone take the last two freights?” Yeah, the good old days when ops was slower. What a shit storm it was tongiht.

So, yeah, it was fun. And in the end, everyone was broadcasting Merry Christmases back and forth – so a pleasant session to end the year on. Great fun!