A few days ago in a prolonged Go game, I pulled a stupid move that likely cost me the game. I’m so upset about this that I sulked all weekend.

And then there was the meeting at work where I was so popular in my regulatory position that everyone who came in sat as far down the table as they could. The only people to sit near me were the last in the room. A friend on the call said she thought I must have felt like Sean Spicer. I mean, shit.

Today was ops. For the last four hours while I’m trying to detangle from work, I got three calls from people who couldn’t make it. This was sounding like another loss. Another failure. I didn’t know what to expect.

It’s 6:40 pm in the wending LM&O mainline through Zanesville. The local is just finishing up its duties. Passenger 95 is due in shortly. Then the Silver Bullet, backed by another drag freight. A coal move is holding off west at Carbon Hill, wanting access. To the east, at nearby Mingo, the local there wants to return home. The river valley is packed with rolling iron, and everything is moving, but we are just a step away from total gridlock. Diesel fumes hang heavy in the mountain dusk.

And that’s when a crew working Zanesville’s west end sees the drawbar of the primary turnout bend under twenty years of constant loading under those cursed stall motors. Bwang! Out of service. They call me and advise that my mainline is down. Everything is going to have to cut over to the siding. I’ve just lost 30% of my passing capacity, and every through train will need a warrant to get onto the siding, and another to get off. My paperwork load has doubled. There are trains waiting at the division points and not enough crews to run them.

So I’m creating an <OUT OF SERVICE>marker to flag the Zanesville main display while calling coal X810 to hold in Carbon hill until I can cut him a new order. The railroad is a crowded, confused mess, one mistake from a flaming wreck. We’re teetering on the brink of crisis.

I’m having a blast.

And that’s the thing. 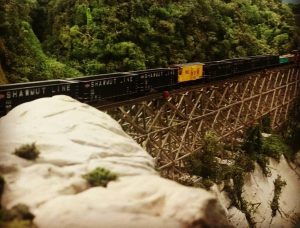 Yeah, we’re short-handed. Yeah, we have had a layout issue that we’ll have to work around. But the crews are running sharp, and I’m trying to pay that off by kicking out warrants fast and getting people over the iron as quickly as possible. Yeah, I dogged Mingo Local in a hole while a parade of westies rumbled past. Harris Glen Local also got delayed as I dug through the to-dos. But we got everything run (thanks to Frank, the train-running machine!). In the end we did it. Great session! I drove home and chalked up a singular win for an otherwise damnible day. Thanks, guys! It was a hoot!