don’t know why it is. I’m like a symphony conductor who has directed a piece hundreds of times and still feels like he needs to throw up into the tuba section right before the performance commences. I always get uptight before a session, even if it’s only the club.

But club ops are a big deal. We have a lot of people who only come out for the ops. And tonight showed why that was. We shined tonight. We had a bunch of guests and a lot of members ready to run. I was actually amazed at the traffic – even though we annulled a freight, we ran all the passengers (including a double-headed silver bullet). And we ran a mess of extras. Even the Tipton Interchange (which has been a tentative idea we’ve been trying out) worked well.

Of course, with all the passenger trains, my evil plans to remove half the platforms from the Pittsburgh Station are now “under review” (meaning shit-canned). Looks like Pittsburgh is going to keep its sprawling complex, at least for now.

I’ll note that, from the back office view, the traffic was pretty intense. And oddly Harris Glen saw no real waits. Oh, I did schedule an impressive multi-train meet at Lehigh. But really, everything paraded east then west over the summit, all as orderly as the tides. It was the river-level part of the layout (Weirton to Carbon Hill) that as deluged during the session, every siding packed (and in the midst of the chaos, I had a passenger engineer fussing that he coudln’t get right up to the platform (I had an oversized local trying to get his work done in that area)). Like I have time for minutia like that – I was writing warrants overhand! 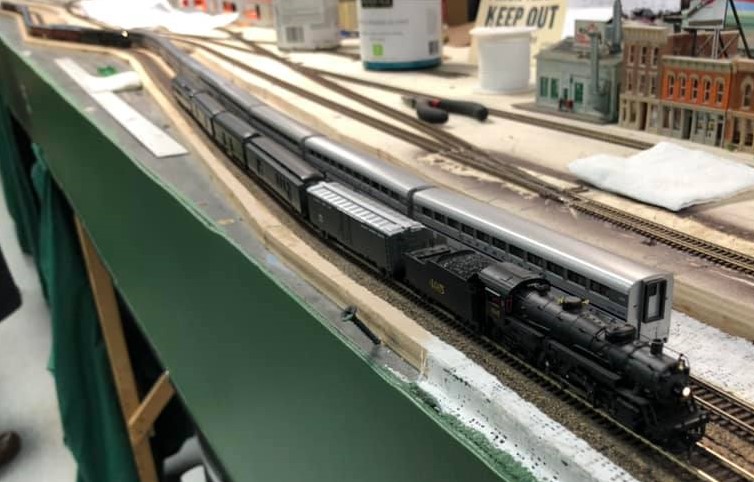 I always thought Lehigh Siding was way too long – until I stuffed a bunch of trains into it (Photo: John DV)

The new guys really stepped in and helped out. Newcomer Dani wanted to run his Daylight – usually we have a new engineer run familiarization with a freight across the division. This time, he footplated with the helper crew up and down the hill (and they don’t get that many warrants anyway) before he took out X4433 and ran through the traffic (and now he knows what checkbox 8 really means). And Chris won the Enthusiasm Prize for trying to get 244 over the road with one engine. Luckily we had helpers coming down that way so we could drag his cut over the hill, but that with youthful optimism at its best. And that’s coming from me, the guy who is infamous for running two four-axles on the front end of heavy freights.

In a nutshell, I had a really good time. The layout is running well (the maintenance efforts are helping). The crews know their jobs and got them all done. We had fun with the game and the visitors were impressed. So, yes, it’s nice to see the old LM&O run big time, full staff!