o joke – when you go wheels up out of Delhi at 3am and touch down in Orlando at 8pm the same day, you’ve either got a really fast plane or you’re making up the time-in-flight adding in the time difference from flying halfway round the world, ten and a half hours in this case. That equates to twenty-seven hours in planes and airports, all during the longest day in your life. And yes, you’ll have jetlag like you won’t believe following this.

Somehow I made it in to work Monday for our most important audit we face every two years, ISO. My managing director said I looked like a zombie. The auditor (who has been to Delhi) was quite sympathetic.

As for India, you can read all about it here – updates every evening.

As for ops, well, let’s just say my sleep cycle is still messed up.

We settled in for ops Wednesday night, backed with a really good turnout of folks. Everyone pitched in to clean and outside of a short right off the bat we ran hot and heavy all night. Thanks to club commitment, we ran everything outside of old 66, including initiating coal service direct to the steel mill. Running the DS panel was fine – I was back in my favorite job, but I could feel that the edge was dull.

Nobody had to wait and I put in some nice toggled warrants, but there were still goofs. Let’s point, specifically, to poor Silver Bullet One, with special orders cut to avoid, not one, but two cornfields. Jonathan, see what happens when you help out and find a short – we try to kill you (we can’t allow competent people to live in our club). And Harris Glen – were there any trains I set up meets for anywhere else but this dinky mountain town? I thought I knew the golden rules – don’t start land wars in Asia, and don’t pass trains in Harris Glen (both attributed to Sun Tzu). And poor Bruce – his first non-helper job on the line (Mingo Junction) occured on a night I loaded it up with Pennsy gons – he won’t come off his mountain again) But thankfully we ran everything plus, so kudos to the crew for a sharp effort. Radio discipline was tight, orders were followed to the letter (mostly) and we all had a good time.

How tired was I? I went home, chucked the blog, and went to bed. 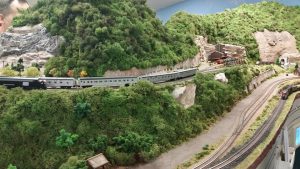 >>>WANT A BOOK THAT DOESN’T HAVE TRAINS, ONLY TRIREMES AND CHARIOTS? CHECK OUT MY HISTORIC FICTION!<<<