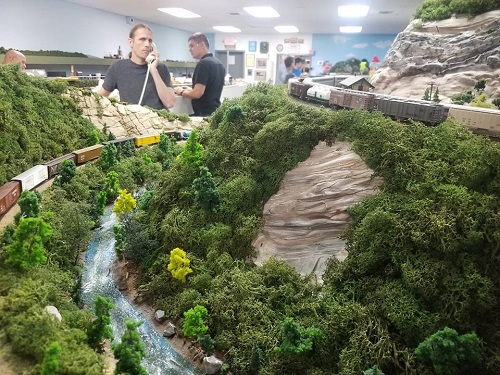 ellertown is a siding we put in without much thought. It’s arrow straight for most of its length, a nice elbow-room passing area where sometimes trains can slide by on the roll. Lots of room. We hardly give it a thought.

But tonight, it was life and death on this quiet trackage in the shadow of the summit.

First up was Extra 3220 west, intermodals heavy and rocking, which we pulled up on the high end of the main. I had two trains cresting the hill, coming his way (414, a coal run, and 202, a drag freight). So neat, a three-way pass.

But then coming west, another extra – I think it was a drag freight. I tucked him up against X3220, right up to his tail, telling the crews not to waste a foot of space. For, as expected, the delayed Harris Glen Local called. Since this engineer is a mean bastard and I don’t want to get on his bad side, I rolled him out of Calypso, west, to tuck in behind the freight extra. So now I was holding three on the main, pointing west, hanging well out past the east end. And now the talk of the night was if those two east trains, a long coal drag and a longer freight, were going to fit in the eastbound siding.

If they didn’t fit, I was dead.

And they did fit. They barely fit. I’m told that had one more rail car been involved, I’d have been backing the local down to Calypso with the tail of the freight extra in his jaws and my tail between his legs.

But what a moment – five by on a two-track passing siding.

There was more of that – I was parading them across Harris Glen, three east, three west. I can’t tell you how many locals we ran but it was a lot, more than my dispatcher program could handle. The crews were well behaved, having a good time and waiting patiently (with the possible exception of someone working that town I’m not good at spelling, who ran without paper because of impatience). 85 warrants, basically an order a minute for over two hours. That’s a heavy rate of orders. And it was a lot of fun. 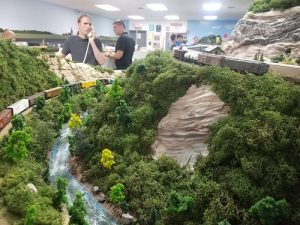 That’s how you run a railroad at capacity, folks. You fill it full of trains and do everything you can to keep them moving.