I’m in the dispatching chair tonight. We’ve got a full house of operators and a cameraman from a local PBS station doing a piece of the various clubs. I don’t want to kill anyone on camera – how embarrassing that would be, but I don’t want to stall the railroad with over-caution. So I’m pushing iron and getting things moved.

Harris Glen’s been reworked. The high summit’s got a a main, a short siding, and an even shorter station track (like a siding, but right along a station platform). Two passenger trains (Silver Bullet 1 and 2) need to pass. But I’ve also got 202 holding west at RedRock and 223 proceeding SB1 west over the hill. 223 is also running with helpers – he’s a long freight.

202 calls for a warrant. Thinking about it, I know the crew is an old hand an a guest, and I always try to get guests over the road quickly (because there is an outside chance of a happy guest becoming a paying member). With this in mind (as opposed to thoughts of safety, efficiency or good sense) I cut him an order to run behind SB2, tailgating with restricted speed, essentially following the varnish through the Glen. 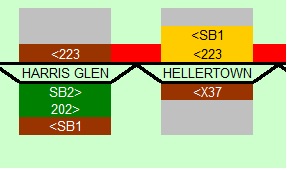 So, the lineup: 223 West onto the main. SB1 West into the station track, and SB2 East (followed by 202 East) down the center siding. I’ll have to clear both those then run SB1 out ahead of 223 to get him onto schedule.

This sounds easy but my gut’s churning – I’m flipping through the issued warrants to make sure I’m not cornfielding. Looks okay. Maybe…

Keeping 223 on the line, I give him a warrant to flag forward (advance behind a flagman) until the back of his train is clear of that turnout. Then he’s to cut the front end off, and still advancing under flag, cross the Harris Trestle and pull up the logging lead. Then a quick call to SB2. He’s got some distance, but I figure he’ll be slow up the grade and can see the logging spur and have plenty of room to stop. I ask him not cross the trestle without seeing engines and possibly cars holding in the spur. Informal (maybe illegal) but it gets the job done. And 202, he’s running under restricted speed so he shouldn’t ram into the back of the varnish.

So that’s how it plays out: both passengers pulling in nose to tail along a tight mountain curve, with a cut of box cars sitting on the main and another freight hanging on its brakes on the west slope. I’m hearing mutterings that I’ve screwed up, that this is a Gordian Knot of highest order. Shit, they just see it as three tracks of cars and holding trains. But I’m already cutting the orders to pull the cork and run SB2 and 202 down the hill, licketty split. After their readbacks (and while they are getting out of town) I cut SB1 and run order right down to Pittsburgh, with 223 building and following. In ten scale minutes, Harris Glen is empty, everyone gone.

What did I have to worry about?

“Hey, Robert, the guy wants to sit down and interview you on camera.”

>>>STAR OF STAGING AND RADIO, ROBERT RAYMOND IS SELLING HIS STUNNING STORIES OF HISTORY AND SCIENCE FICTION. FOLLOW THIS LINK FOR BIG DEALS ON TALL TALES!<<<