t’s 8:15am in the Cincinnati rail yards. I’ve got some SP F3’s coupled to the 244 consist (and some geeps stuck in, since my slow-rollers wouldn’t even get them out of the yard in my test pulls while waiting for go-time). But lights are on, engines are rumbling, we’re good to go. At half-past, two blasts of the horn and I’m pushing hard, fixed on making Carbon Hill for my first meet of the day.

The F-units, one time my pride, are really running bad. They seem to need a warm up session to get them moving. By the time I’m around the power plant and heading for the first tunnel they seem to have gotten their hooves beneath them. I get into the high end of Carbon Hill at 9:10 or so, easing into the siding. I even turned off my headlight so as not to blind 223. 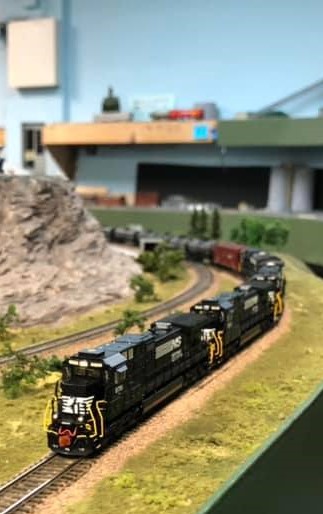 He’s six minutes late, of course, doodling along, running all tankers. Nothing makes me more jumpy than watching my scheduled departure time slide by, the minutes stacking up. I’ve got another meet up the line at Mingo, this time against vanish running in the superior westerly direction, superior to me in every way possible. As soon as 223’s tail end rumbles past I’m on the throttle, the rear brakeman jumping for the crummy as I barely slow down for him to grab-iron aboard after closing the turnout. And we’re off.

Hit Zanesville at 9:50, six minutes down but gaining it back. Should be no problem making Mingo for my meet. I come blowing out of the tunnel under the auto plant and 95 (coming around the river bend between Martin and Weirton) points out that my train is awful short. Yeah, a couple of cars. I’ve broken away.

The clock is ticking through the minutes, heading towards my be-clear-time of 10:56. But I’ve plenty of time. I walk around to the other side – there’s my cut just short of the tunnel. I put a hand on it and give it a solid push to roll it through.

And from inside the borehole, I hear the sound of car after car coming off the rails, tipping over, horrifying in its gentle mockery.

Now I know I’m not going to make the meet. I run the engines (and front bit of my train) up to Mingo and flag 95 to stop until we can fish the balance of my cars out. And what went wrong? What didn’t go wrong. Three cars each lost an ill-fitting axle. And one tank car dropped an entire truck off. One box car, I refitted the wheel, rerailed it, only to see the wheel come back off while rolling it up. I eventually pulled every ailing car off (dumping them in GM’s parking lot). Thankfully 95’s engineer helped me with getting my train together so I wasn’t more than an hour late by the time we got him past me and moving. I watched him roll past (passengers hurtling their soup bowls out the windows at my lead units). I mean, this was one of the worst rail issues I’ve ever faced.

Rolled into Martin, heading in from the right hand main. Of course, the critical turnout I needed wouldn’t throw. I did everything I could to make it come over. Wires were connected but it wasn’t getting power (later I found out that there is a bad solder joint under there – something else to fix). Crawled in to my holding track, totally battered. My layover time was shot to hell. I was back in the cab after a quick piss break and rolling out Martin’s east end, back on the dot at 1:30 PM, heading to Red Rock for my third meet, this time with 247, also superior by direction.

I’d felt that I had enough power. I rolled through Pittsburgh with a commitment to breast the summit easy. And that lasted all the way to the Longbridge turnout. Something happened there, something… chipish. Suddenly my lead unit dropped out. At first, all I knew was that I could barely get up the hill. I managed to limp into Red Rock siding, making the meet time by three fast minutes. 247 was clearing the high hole, riding dynamics down. Me, I was uncoupling engines and testing them individually – yes, the lead unit wasn’t running, not at all. So, a quick switcheroo: geeps on the front, B-unit in the back, A-unit in the weeds and we’re ready to go. And that’s just as 247 rolled past, announcing green flags. There was a second section somewhere behind him. And yes, I had another meet (with 97, who is just an older version of 95 – I didn’t want to stab the same varnish twice).

Happily 247-2 was riding on the first section’s marker lights, not too long a wait. But I was 10 minutes down again, a great thing for a worry-wart like myself to face. As with 223 earlier, the moment he was clear, run 8.

Happily without dead-weight, I was climbing hard up the western slope. Plan B was to go into the siding at Harris and meet 97 there, sawing by if necessary (dumping off those loose-axle cars had shortened me significantly). Through the Red Rock hole and climbing hard, thundering past the Notman station, rattling over the high trestle. Harris Glen was in sight, the station board green. Glanced at my watch as I got closer to the commit turnout. 3:27 PM. I was two minutes down and gaining back time. And this is classic TT&TO – swallowing your ‘baco as you literally pull back the hands of time, racing for the next meet point.

So down the long grade and around the spiral tunnel, my attention split between my train (wheels, stay on your trucks!) and the wall clock (tick tick tick). Through the second tunnel and over the viaduct, banging off the dynamics and letting the train’s weight shove me right up to track speed (if not a touch over). The final up-hill S-turn, rattling over the turnout and onto the siding. Clock check – 4:07 PM, three minutes early. And way down the sidling, eastern end, headlights gleaming. 97 and I pass on the slow roll like ocean liners, a rolling meet, perfect.

The rest of the run was by-the-clock easy. Tucked in at Bound Brook at 7:01, on the advertised.

The funny thing about the session was that everyone else seemed to have flawless runs. Big smiles all around. It’s actually quite fun to run the layout under timetable – the crews are learning the ropes. Every train ran dead on the dot (well, other than people delayed by me, but they earned it all back). Nobody made any mistakes (well, any mistakes not involving ill-fitting metal wheelsets).

We’re going to give this another try soon. There are timetable changes coming, ones that will allow the passenger trains to run advance sections to stage up. Also, we’ll press merchandiser cuts from Martin to Calyso, easy extras with short running times to fill in those wait-gaps. And yes, some special rules to allow passenger trains to permit their riders to alight directly on the platform (the snobby toffs). It keeps getting better.

So, yes, N-trakers, if you haven’t tried these ops, you should. The crews are finding it easier, even calmer, than our traditional monthly sessions.

202 running without a care in the world. 244, eight hours behind, would trigger some Indian Burial Ground curse (Photo: John DV)