idway through the session, the two dispatchers (Southern and Louisville & Nashville) switch. We’ve only got a couple of minutes to update our replacement on the status.

I don’t know how it was exactly explained to me but it was something like “Train so-n-so is in Norton and will need to go to Blackwood” makes me think that he didn’t have a warrant. But that word “need” seemed to mean something different between Tom and myself. It turns out he actually did have a warrant and was waiting for other traffic to clear before he started down.

Fresh on my panel, I saw a couple of trains waiting on the South end, wanting to go north. There was only one heavy local on the Blackwood siding so I paraded the two along, nose to tail, to Blackwood main. 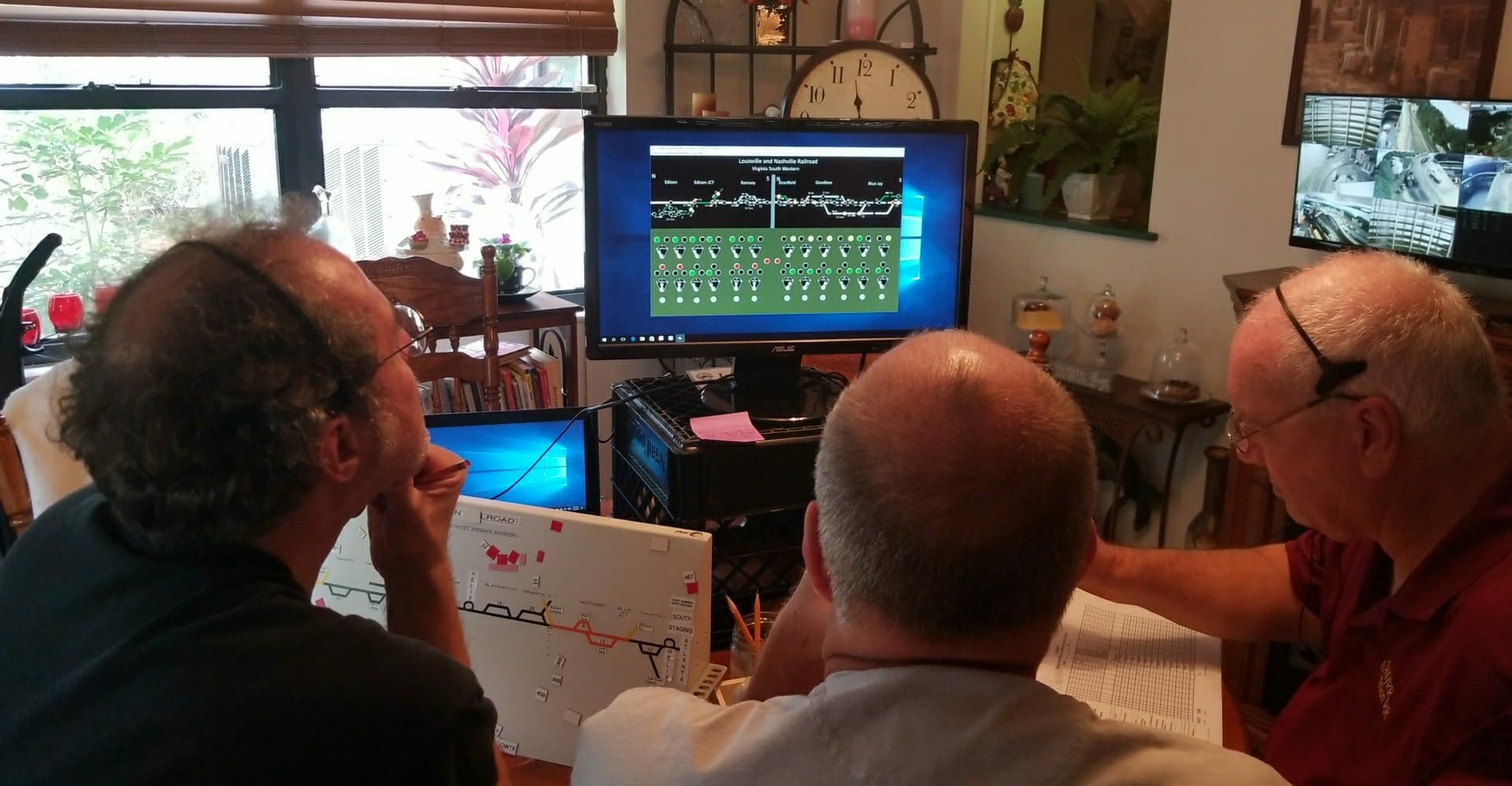 Not this session, but the same cast of characters.

So yes, now I had four trains at a limited passing siding. That was a bit of a bad moment, what with all the rest of the railroad wanting my attention. All I could do is ask the unexpected southbound if he and the other train could work out a deal where someone pushed into the industrial trackage (so the northbounds could go by).

Okay, then there was only one thing to do – I told the unexpected Southbound to take a warrant. “Okay, blah blah blah Checkbox 2, proceed to Norton” (i.e. back all the way up to the yard). Couldn’t help it.

Pause on the headset.

“Wait, I think we might be able to fit after all.”

Nothing like telling someone he’s going to have to eat a turd to get them to try a little harder.

So with them cobbled into the siding, spurs, and who knows where else (maybe they lifted cars off by hand) we were able to get the two northerly trains past easy-peasy (though one of those was dyslexically 810 or 801, which really made some of the wait until orders get dicey). But it worked  out and we got everything through.

I did smother Norton Yard with trains after my start – I was desperate to get my line moving and the null-space of yard limits is an inviting storage area. According to my dispatcher program, I had six trains in that yard. I think the yard master was about to come in and slap me. But they all eventually terminated or moved on. So that cured itself.

The nice moment of the session was when N-trak Cody (in preferring to run under my paper and not Tom’s) ran a Southern train up my L&N line and collided head-on with one of my southbounds. And that was the note the session ended on.

But it was a lot of fun – hectic and crazy, but we moved a lot of stuff.

Thanks again, John, for the invite!