Looking through the hatches to couple. Photo: Jared Davis

The Milwaukee Road – Wisconsin Division is a comfortable layout of old-school design that offers some casual (and very fun) running.

The thing was, this weekend I’ve run locals and through freights. But today I got offered a run I’d never done before – boats! Or more accurately, ferry operations.

I knew a little of what goes into ferry steamer operations but had never simulated it. So here was the deal: I came on site to find a switch engine, a four track yard, three flat cars and a docked ferry (holding twelve cars). The first thing was to receive an inbound train and give him the outbound cut. The inbound cut then had to be broken into four-car sections and pushed (and paused) over the scale tracks. Yes, when loading a tippy boat, it’s a good idea to know all the car weights.

Now I wrote down the car numbers on a form and then transposed them to another column, using a formula that randomized their order. These cars then had to be resorted on another track. And now we were almost ready. First, we had to unload the boat.

But I couldn’t take my engine across that bobbing, tippy ramp, and certainly not onto the barge itself – I’d send her to the bottom. Remember those flat cars? That’s how the railroads do it. Using the three light flats as ‘handlers’, I got as close as I could and snagged the cars off in specific order (a few off one side, a few off the other). Finally, the entire ship was unloaded. That cut went over to the outbound track.

Now the loading – carefully I reloaded the barge: again, a few on one side, a few on the other, following the written order of loading until the entire set of twelve had been secured. And that was it. The Viking was now ready to cast off and I was done.

I’ve never simulated that on a railroad – great fun! And a great weekend! 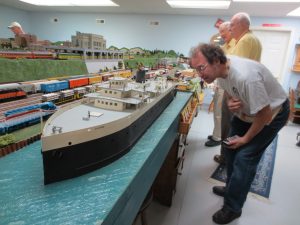 Looking through the hatches to couple. Photo: Jared Davis