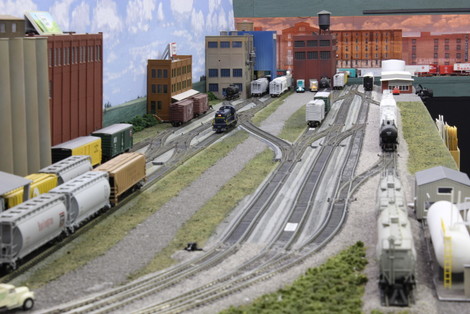 t’s a long run from Trinidad to Denver, mostly double-track main, one for passenger, one for freight. All down its length, industrial centers, mines and cities sprawl along the desert route. And unlike the SPR, this time I wasn’t bashful. I gave everyone a quarter second to opt for dispatcher and then my hand shot up. “I’ll do it”.

The pace of this railroad is pretty easy, and if you look ahead you can pretty much route them from track to track to keep everything moving. Of course, I’m always surprised by how many operators don’t call in control points or let me know when they’ve left my main – critical information I’d really like to know. Regardless, I moved everything that came my way.

The only near disaster was when I ran a southbound general freight down the passenger main to get around a northbound movement. All fine and good. Then I realized that a passenger extra was scheduled south in ten minutes. This movement was flagged as do not delay. The railroad president was aboard. Nervously I called the southbound freight, only to find him in the huge helix, backing up to fetch some lost cars. Uh oh. Told him to expedite and knew I couldn’t cross him back over until he got to Pueblo. Told him I was clearing him to retake the freight main there. Confusion between us – he thought I controlled that crossover; I didn’t. So he rolled right past it and stopped, not having crossed. I told him to back and then move into Pueblo to clear the bigwig’s movement. Just as the passenger extra called an approach on the final control point before Pueblo, the freight reported clear.

“Passenger extra, you are clear all the way to Trinidad, no holds.”

As he rattled into staging, the superintendent passed by, complementing me on my sharp train handling and how I’d get a promotion out of it. That’s fine, because I knew if I’d delayed him, I’d get an anti-promotion, maybe even ending up as an engine hostler in Chicago. Man, wouldn’t that be a fall from grace.

Anyway, a fun day on a fun runner. Combining this with the CNW, I’m run ragged. But it’s a satisfied sort of tired.