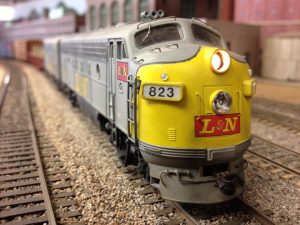 It’s been a white for this pike, over a year. The SWDRR is a cool look at mountain railroading, where two railroads are forced to share passes. And in this, two dispatchers sit in a side room, me for the L&N, and a fella named John for the Southern. We worked as well as two competing railroads could (but I’ll admit to holding back on of his freights until I could be sure I got some needed switching done at Goodbee).

But overall it was fun. Nice to see I can still speak fluid warrant, that I can keep the trains moving and not kill anyone. Oh, there were a couple of moments, a fearful doublecheck to make sure I hadn’t doomed two trains into a fiery collision (I hadn’t). And I issued warrant 34 twice (a screwup in giving each a unique number). And I had the yardmaster poking his head into the room, weeping his salty tears that I had his yard all blocked up (hey, I don’t waste rails, so when I tell you ever inch of steel between Norton Yard and Goodbee’s got a wheel on it, go back to your yard and shuffle cars).

But we had a good session, a great session, one that makes you go home and write your thoughts on it was a wide, satisfied smile.