In my last two blogs I went over the ass-aches I went through to drag this railroad into operations. Let’s add one more – the cat got INTO the layout, crawling around inside the framework and walking along the hidden mainlines. I had to drag her out from under it – this stunt earned her a big squirt off the spray bottle. She’s still sulking.

So there I was, bringing a new automated dispatching program online, unsure if I had track damage under the layout, wondering what was going to happen.

And what happened was wonders. 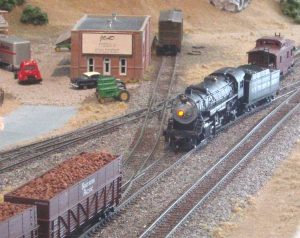 Lucky cuts in behind the sugarbeets.

The trains ticked out of Watsonville right on time. Salinas purred through its reefer shifts. Me, I was over at King City, sitting behind the hot boiler of “Lucky” (Mikado 3304), working helper detail. Shoved freight 920 up the hill just as dawn broke. As we got to Serrano, I whistled a desperate call to stop up to the head units – we should have been in the siding but had blown past our meet with the Coast Mail who would be thundering down on us in 20 minutes. We got the train stopped on the main (wrong place). Ran a brakeman forward to flag the Mail into the siding. (this was like deja vu for me because I was helper on the same train last time and we skipped the meet and damn near took the Coast Mail in the face at the yard board). Anyway, pushed the freight into SLO, watered up, then dropped back down, pocketing into Serrano to catch the Noon Daylight hghstepping past behind a pretty GS4. Hoo hah.

The rest of the day was pretty easy. Pushed a second freight up, and also shoved a load of beets over the Santa Lucita Range.

The railroad wasn’t running flawlessly – the dispatcher program tossed up some bugs, a turnout died and had to be manually shifted, and those couplers gave me fits. Worse, that engine with the bad wheels? His back unit started going offline on the last run.

But the crews ran like demons. Even with the difficulties, every car was getting snagged off every siding. The trains were checking the SLO platform on the damn dot. The SLO yard crews were working the yard exactly as designed, getting the stuff out with plenty of time. Great fun to watch Merchandiser West swap its trailers out in SLO and run down the hill, the Lark riding its silver caboose.

And… it was fun. Really a lot of fun.