odeling in N-scale is problematic. Always small, always touchy, very tricky. But when you see it done well, and see what you can do in tight spaces, that’s when it really shines.

It was shinning bright on the Southwestern Pennsylvania RR today, an N-scale pike, part of our ops weekend in Atlanta – Dixierails. Dave Pitcher has a nice run, a high density main broken by a crossing line. The central yard, pretty much on the junction, is a busy place. I’d dispatched here before, a couple of years ago, and wanted to try it now. 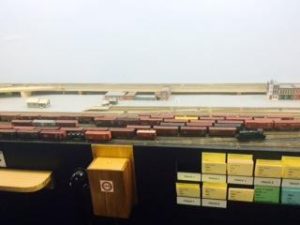 So things were rolling. Had trains coming in from all directions, and it took a while to remember what was where. But we were tacking them off, and I was playing ahead, looking to the next departure time, finding out what functions the trains had and moving them in the most efficient manner. It was only later in the session, where the “part time” railroaders started gas-bagging in the lounge, that things began to fall apart. Oh, I was still moving trains but many of the smaller runs weren’t getting made. Worse, some of the trains were running so late, they were finding other trains occupying their staging tracks. So now I was putting bandwidth into looking ahead and making sure storage tracks I’d assumed was clear actually was. Still, we ran all the card deck trains (the primaries) and there were no headlight calls. I didn’t kill anyone – always a plus.

Always nice to come out and get a good “attaboy” from a room of modelers. I love dispatching but it’s edgy stuff. You screw a couple of trains and everyone knows who knocked the session flat. Not this time. We moved trains in Southwestern Pennsylvania tonight!

>>>WISH I COULD MOVE BOOKS LIKE I MOVED TRAINS. IF YOU WERE THERE AND I GOT YOU TO YOUR DESTINATION SAFE AND SOUND, YOU OWE ME! BUY A BOOK!<<<