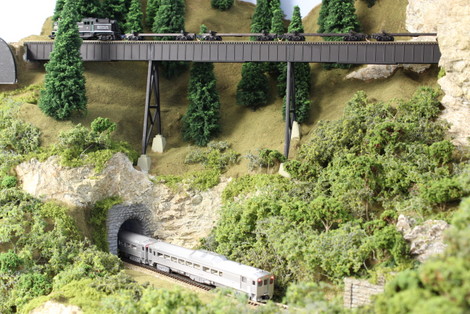 dispatch a lot. And usually I have no problem taking this position. So when we were all loitering in our briefing for the Southwestern Pennsylvania Railroad and the super called for the DS, I was standing there doing my “Ah, shucks, sure, I can do it” modest number when someone snatched it right out from under me. Blink blink. Wait. What just happened?

It ended up biting me in the ass, too. I was a heavy coal job straining out of Pittsburgh, entering the main (in hidden staging, controlled by the dispatcher). I called. He cleared me and (supposedly) aligned my hidden turnouts. I advanced. And after a while, I realized I was stuck. Asked the superintendent for help. He looked in the dark staging yard. No, I wasn’t stuck. I was fully derailed.

And in the worst place – in a buried turnout throat under scenery. Fortunately I discovered that a line of building flats were removable, allowing me to fetch out each engine and car with my fingertips, one at a time. It took about fifteen minutes but eventually everything was out. Finally got underway. Met a train at the first siding I came to (who was impatiently waiting for me), rolled past him and went on the ground again. When the opposing traffic met me, he didn’t realign the siding turnout he’d used back to the main. And so thumpity-thump, I’m on the ground again.

Hey, these guys were supposed to be good operators but I was finding all sorts of turnouts left in wild position; into spurs, into sidings, into other dimensions. Eventually I was running in permanent restricted speed, walking ahead of my train and checking for mis-set turnouts and land mines.

So it was a long night with a couple of tie-ups with bottlenecks at Connelsville Yard (hey, that’s railroading). My over-and-back coal run took a long time, two hours of real time for an out-n-back. But that’s railroading, too. But dammit, I made it, regardless of the track alignments the dispatcher tossed at me.

But really, I’m just like Ernest Kessler in The Great Waldo Pepper – I keep track of talent. The owner can’t do much when a dispatcher or yardmaster falls down. But the owner did give us a wonderful layout to run on, one with a delightful mainline (two, actually) with a lot of interesting jobs all wrapped up in Pennsy brown. Great time and good running (if you watched for open turnouts). This layout is one I always point to when I talk about how N-scale can be used to fill a modest basement with a massive pike. Gorgious trains against some really neat scenery. Super session!

>>>LIKE THIS? BUY A BOOK! AFTER EIGHT HOURS OF DRIVING AND FOUR HOURS OF RERAILING, THAT’S ALL THE PITCH I HAVE IN ME!<<<