fter the mad dash I made last night to the club over a faulting alarm, it was nice to just go out all casual-like the next day and run the Tuscarora alone. The thing about solo ops is that it’s a lot quieter, a lot more controlled, and the only bungling is yours.

This session was part test – Designer Elf Steve had built me a sub-panel which could run just the turnouts without interlocking logic. It’s a small panel that makes things a lot easier for solo ops. And it worked perfectly – I just put it on the table under my shelf-booster and tossed the turnouts when needed. Perfect. Exactly what I wanted and it worked like a charm.

Also working like a charm was my SW-2, which Frank the Z fixed for me. It still stalled from time to time, but this is N-scale it its only got four axles. Acceptable. 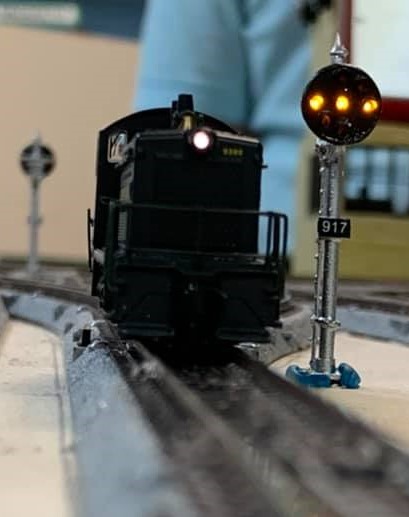 So it was just me, shifting the freight around Tuscarora and running the full session in one go. Given some of our PeeDee Twister Games we’ve had, the final local this time was straight forward. I think I did it with maybe two run-arounds and some clever indexing. Overall, the session maybe took an hour and a quarter. After I put everything away I stepped outside into the blazing Florida sun, still thinking of that twisty little valley in Western Pennsylvania, throbbing with the rumble of that lonely switcher.

>>>GET A BOOK, Y’ALL, AND GET ME OUT OF THIS DIRTY BACKWATER RAILROAD LIFE!<<<