fter a long weekend at a train convention (and two weeks of ensuing covid isolation) I was able to return to duty on the Tuscarora. The railroad surgeon cleared me for service. And back I went to the dispatcher’s desk.

Also on duty was Kyle (on interlocking), his father Phil (on Scheduled trains) and Greg (on Coal). Yes, so we had a rusty lever-thrower, a rookie on the timetable and a coal guy who forgot how the tally sheet worked. I guess that’s why we ran four hours on the session.

Still, Phil (even though he is a model railroader, he was totally unfamiliar with the Tusk) dove in anyway. There were a couple of goofs early on and his trains fell behind the coal extras. I only realized as I was writing but yes, interlockings call the shots in their plants, but the DS should be keeping the trains rolling and not letting scheduled trains fall back behind empty coal trains. As I said, I only realized this now and it was my fault Phil got stabbed an hour or more on several occasions. 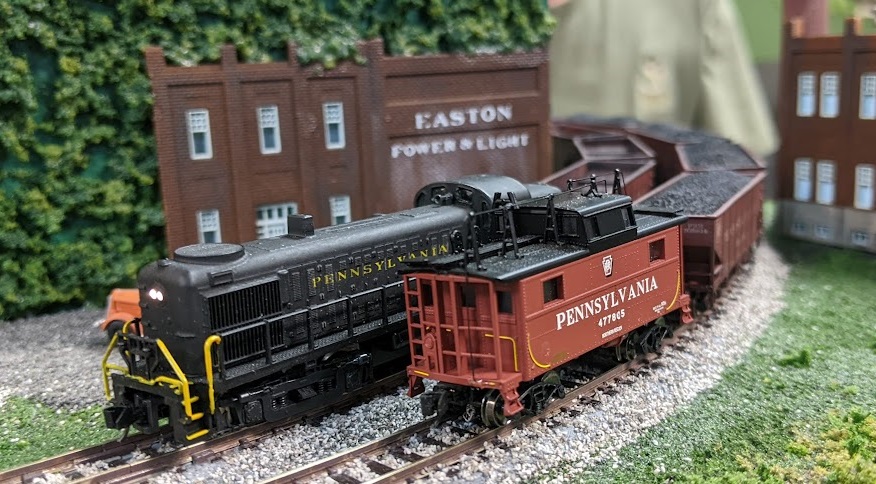 A coal extra couples onto an empty cut out of Easton P&L, ready for a fast run back to the mines (Photo: Phil S)

Some of the new scenery was very well received. The internally-lit brewery got ooohs and aaaahs but I noticed, at the end of the session, that one of the ceiling lights had blown out (dammit). But the trains ran well; very little stalling and derailments mostly from rough uncoupling. Overall, everyone had fun but yes, a four-hour session is a bit of a slog. I think next time, we should be a little smoother at our posts. And as the dispatcher, I really need to step in and tell the interlocking tower which trains I want to run down the line. He’s too busy (especially with two trains in town) to anticipate problems. That should be my job, and will be on our next session.

But fun was had, and that’s what the line was built for.

The operators at TUSK tower watch the Easton Turn spotting cars up the line. Note there are three scales in this shot, S (foreground), N (the layout) and Z ( the storefronts behind the tan Fuel Distributor). (Photo: Also Phil S)

P.S. Oh, and as a dispatcher, I kept calling Phil “Frank”. I mean, WTF? How can I call train orders down if I can’t get names right?