es, I was able to round out a wonderful year of operations (with all the covid concerns) on a high note, coming back to my personal favorite, my own Tuscarora Branch Line.

Now, before moving to what happened, a quick New Years Tally. Over the last year I was able to operate at the following places (ranked in order of attendance):

So that totals out to forty-two ops sessions, pretty good all together. The Tuscarora I ran the most, followed by my club layout, the LM&O. Still, I managed to get a couple more in there. I’m so grateful I could run on so many fine routes; when I was a  kid, my Dad and I never joined clubs and I always wanted to run operations. Now I’m making up for lost time!

So yes, we did run the Tuscarora on New Years Eve. We were supposed to be four, but one member had a covid contact and bowed out day-of. With John DeVasto crewing the scheduled trains and Greg Wells (my primary operator) getting black-dusty on coal, I took both dispatcher and tower positions and we ran the crap out of my railroad.

John seemed to have a good time with the Union Railroad loaning power to the Pennsy, pushing the wayfreights through and spotting cars. I think he was surprised at just how  much work he’s got when it comes to the local. And Greg was guinea-pigging my new coal tally sheet, calling his own runs as he figured how to do it efficiently. There were hitches and confusion galore as new crewmembers worked out their posts (and I really screwed up the interlocking a couple of times). Long session, too, with all the work. In the end, the Tidewater extras were simply not run (the coal guy a bit overly-focused on moving black diamonds east). But we got everything else done and everyone seemed to have a good time. 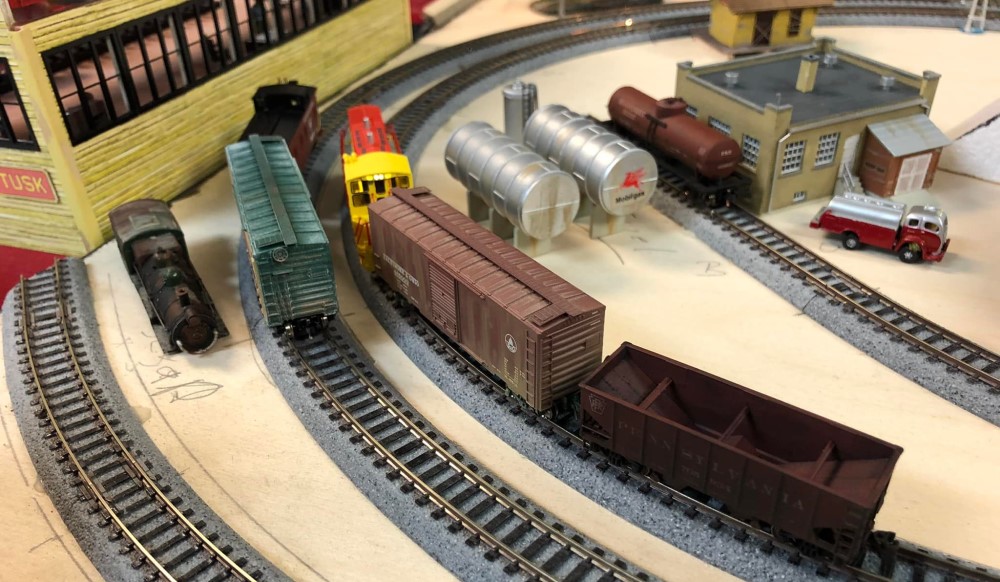 The PeeDee struggles with the daily cleanup as the sun sets over Tuscarora (Photo: John DV)

One item of note – Greg was doing the new tallies but not quite the way I wanted him to. I assumed the sheet should be kept up to date as you moved through the hours. Greg didn’t tally at all, simply crossing off the cut availabilities as he moved them. Wrong wrong wrong. But as I rolled home on the 408, into my own setting sun, I realized that his was was better. So, outside of being a game designer and a software metrics guy, I’m able to admit that his way was a lot smoother (and required less math). And so I’ll alter the sheet to support it and we’ll go with that. Another improvement for the Tuscarora.

It get’s better and better. And let’s hope the same is true for this new year!