o when you set up an ops session on get three guys willing to show, and then on the day of, two of them bail, you’re pretty screwed, aren’t you?

For a moment I figured we’d cancel – it was just me and AJ. But John was there and agreed to run coal. I told AJ that there was no better time to learn the tower – we’d treat it like a practice session. I ended up with both the local and the dispatcher job so I was really going to be busy.

And we started the sequential clock.

It took AJ a little time to figure things out. Lots of faults and confusion. But I can clearly remember the moment when he “got it”. Suddenly he was throwing the main and siding routes like a pro, lining up the tracks and setting signals. We picked up the pace. John was running coal with his six axle diesels (never thought I’d see a Tier 4 Gevo in NS livery rumble through Tuscarora siding – nearly took the old train board right off the station). 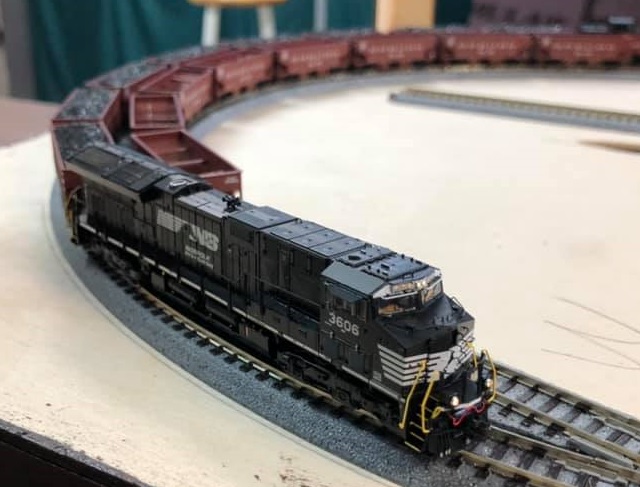 They said it couldn’t be done! Credit: John DV

We managed to run most of the session – just getting up to the PeeDee and loading up the Tidewater when AJ’s pop came to pick him up. Disappointingly, my SW-7 started running like crap at the end. I tried cleaning it, the rails, my mouth, everything.  After the session, I just ran it around the circuit for five minutes or so – after that it was fine. Weird.

Anyway, kudos to John and AJ for manning the various jobs and saving my session. They really did me proud.

Maybe I need to charge a refundable gate charge next time, eh?