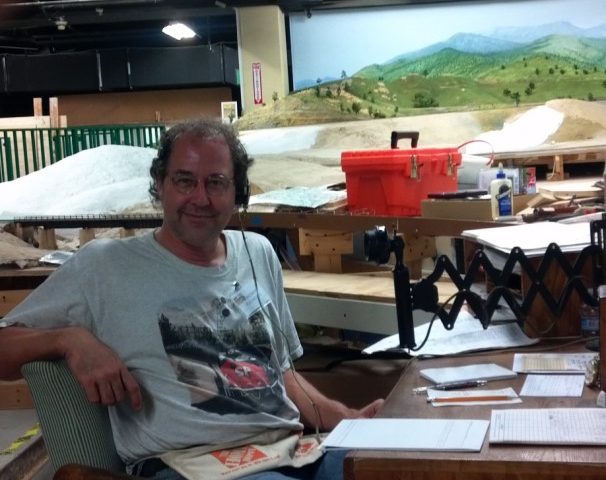 It was my train, dammit.

It’d come in from Famoso late Saturday evening, my pal Jerry running the cut. I rolled out of the Bakersfield roundhouse with a puffy consolidation, ready to latch onto the back and push for all I was worth. For the next ninety minutes, we switched cars, waited, helped the yardlettes, waited, begged for clearance, and waited. The session ended with us built and aimed at the yard throat.

The next morning, I showed up and got into my seat, only to get tossed out by Bob, my supposed relief. WTF? This was MY train! I went to find the crew caller and see what the hell was up.

When they film this part of my life, this will be one of those foreground/background zooming distortion moments, where I look pale and distraught. And that’s because I was.

They were putting me on a desk!

I’d always wanted to run one of the train order stations. This is another facet of railroading, catching the orders from the dispatcher, writing them in multiple copies (with carbon paper) and doing the readback. I’d studied how to do this two years ago and didn’t catch a shift. Last year I came out and still didn’t get a desk slot. This year, I hadn’t given it a thought. And that’s apparently what it took.

Anyway, thankfully the guy who did the trick the night before sat with me for a bit and walked me through all the procedures. We went over all the paperwork, and he sat with me as I OSed a few trains through. You know, you look to one side and see a train coming. Heel to the foot pedal. “Woodford, one coming east.”

The dispatcher crackles back. “That’s likely Extra 4180 coming through. No orders.”

I nod because I’d heard him clear out of Caliente about thirty minutes prior (and kept a log of coming trains, as my predecessor suggested). As the train gets close, I ask the engineers for number and signals. “Extra 4180, white signals”. Yeah, he’s an extra. I verify his engine number as he rolls past the desk then drop the signal boards – no orders for him, no reason to stop. He nods. As his engine passes my little modeled station, I jot the time in. As the caboose rolls past, I jot the time out. Then, “Woodford, OS”.

But that’s not the tough part. For my first two hours, Woodford was spared any orders but I was writing, copying each order to the busier register stations, silently practicing the readbacks. It’s harder than it looks, having to write as someone dictates, then the read/spell-back (all numbers, directions and place names spelled). So I drilled and practiced and got ready and suddenly…

I fumbled the carbon in place, swallowing, feeling my heart pound.

And Woodford was. It went pretty good that day, good enough that when the train I’d been booted off finally rolled into my station to break helpers off for water, I was chatting easy, jotting proficiency, and writing concisly.

I cut an order to those engineers on my old ride (those lowly engineers), flipped up the signals and sent them on their way.

>>>IF YOU’D LIKE TO SEE HOW COMMAND AND CONTROL COULD HAPPEN IN 330BC, HAVE A LOOK AT “EARLY RETYREMENT”, RIGHT HERE<<<