The first real session on the Tipton, Youngstown & Erie.

I’d prototyped a timetable for JW to use – all he had to do was move the times a bit and add a couple of cornfields and he had it. But in this, one of my favorite runs in the design was a LEM to Sandmine, picking up sand and log cars, then a turn and a long run to Staffordtown. Exchange the cars on those sidings, then back to respot for the next day. 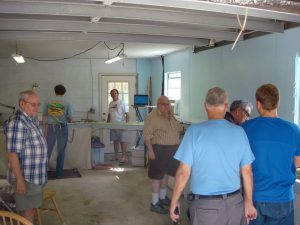 The boys and their toys. Photo: Frank Zvonchenko

When the jobs were assigned (and assigned, and reassigned – did JW seem a bit nervous to you?), I picked up the Sandmine job. Toss the hat into the air and wahoo! So I found myself an hour or so in, switching the Staffordtown industrial area (and cognizant of the fact that it was once LM&O mainline track, before the club switched to the new modules and these were surplused). But it was fun, just running basic switching moves, pushing the caboose through a cutoff behind the flats to pick up, then running back forward and shoving my cut back to push the empty flats past the cuttoff to couple the caboose. Pull through, drop the inbound flats on the roll, swing back around to take the outbounds and done in four quick moves. Nice. This was the run I smiled about as I’d designed it, and this was the one I really wanted to do. And for good reason – it was a blast.

I’m really looking forward to running more on this fine line (with all the history beneath it).