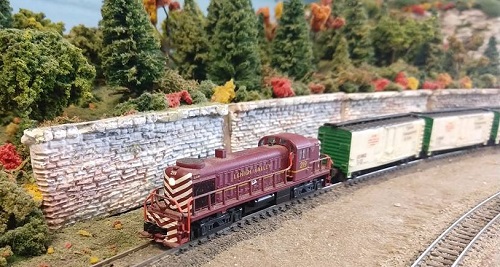 ne thing that’s fun with ops is where people learn skills and improve. I’ve seen it when people who would hardly budge off passenger trains run a freight, then move to locals or yards. But it’s not only operations where I see it – it’s also in layout designs.

Two railroads have been rebuilt in our area: the WAZU and the TY&E. And both have had significant improvements to their… presentations, for lack of a better word. Better workspaces, better runs, better location of critical turnouts. On the TY&E, specifically, we’ve seen the elimination the duckunders, reaches and that difficult to understand junction. Now it’s true point-to-point, with reasons for industries to be where they are. It feels like a railroad and runs decent, and hey, that’s the stage we need for ops.

Ran my usual, the sand and log train, bringing produce down the hinterlands to Staffordtown Industrial Yard. And even through the start of the session was a lot of tinkering and instruction, eventually the superintendent breathed into a paper bag and settled down and the crews could get down to the brass tacks of running trains. I found it interesting that a socialist like me would actually, in this imaginary world, seize a monopoly on the entire lumber production down the entire supply chain (there is a Raymond logging plant and a Raymond sawmill). But everyone had a blast, there was beer at the end, and everyone went away happy. And that’s what a model railroad is all about. Sure, everyone says its about modeling a transportation network, but it’s also about to have fun, too. And we had lots of fun.

Now, if this cheap-ass company would put a caboose on the tail of my train. Imagine, the crews having to hang onto flat cars across a half a division. Dangerous. 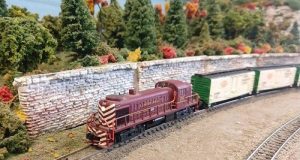