aybreak is just coming up over the low eastern hills. I’m sitting in my TY&E Yellow Perils, idling at in the weedy lot of the Raymond industries, my cut filled with full sand hoppers and empty log cars. The good thing about this is it means I’ll have a semi-loaded train going each way. By organizing the cuts, I can make the ride a lot easier. After all, I’ve done this job forever.

While I’m sitting there, some do-gooder track walker comes over, shoots me a withering glance and throws the industrial turnout in front of me to normalized routing. I casually toss him the bird and send my brakeman to throw it back – there’s no reason that industrial turnouts need to be aligned – it’s not like the Tipton Flyer is coming through the Raymond lots anytime soon.

And it’s not like I need the distraction. After all, I’ve been keeping careful watch for the coal train, which goosed through here about an hour ago, going run eight towards Tipton. Okay, he’s accounted for – last time I missed him here and found him in a tunnel. Having just gotten released from the burn ward, I don’t want to go back anytime soon. 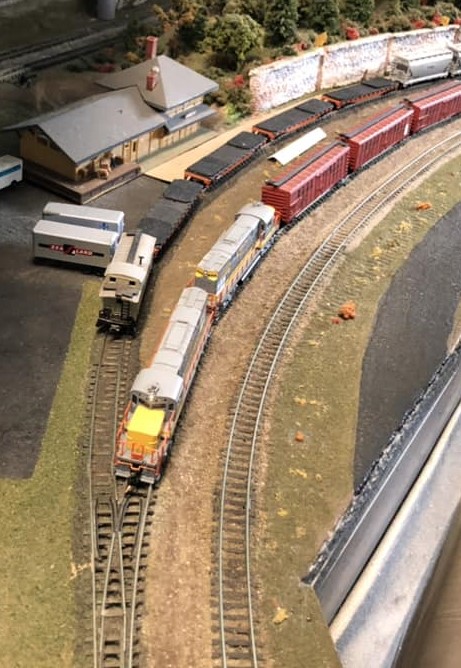 And while I study the new timetable, I realize there is an issue (specifically with my train (specifically that I might die)). Call through the callbox to the super and explain it. He agrees and I tell him I’m going to make sure I meet that train before going down the spiral tunnel.

All these near misses (and explosive hits) have gotten me thinking. Since we need to redo the wall schedule anyway, maybe we can put implied meets (when a train is working just off-road and another passes while he’s occupied) on the timetable. That would help alert engineers as to trains that pass (as well as trains that have not done so).

Okay, my go-time comes. Since my brakeman is out smoking against the reset switch stand, I gesture him over to the mainline turnout throw. After all, everyone who is supposed to be by is by. Time to head down to Staffordtown. With that, I put the stand into Run Goose and blow out of town, shaking the spikes out of the light rail and highballing to Youngstown.

Stepping out of character, it was a great session (though JW looked a bit battered by the end of it). Everyone had a good time. Greg and I talked about it at dinner later and noted that idea about the parenthesis around implied meets. Those “Mystery Meets” are what is killing our crews. Well, I’ll put pressure on the super when I see him next (after all, he and I are involved in charity work every Monday night). Maybe I can sway the change.

BTW, thanks to the crews – we had a good assembly of crews and were able to give JW a chance to quiver on the floor unbothered. We really goosed that session!