By that, I mean we had a room full of enthusiastic operators in a large home (well, clinic) layout, we ran everything and most of the people stayed for the end. Just like our club used to do things.

It was an interesting session – I’ve been dispatching at Andy’s for years (across three or four layouts). The Wazu is by far the best, a loose simulation of the UP line from Spokane to Portland. And for this session, I pulled out my new dispatcher program (focused more on being a true dispatcher sheet and less of a magnetic board).

The problem I faced was the communications – Doc relies on radios and I didn’t realize how disruptive it would be. I’d get a call, take it, get whatever info I could get, then set the radio down and enter the information. Once it was all in, I’d pick the radio back up and finish the call. Just picking the radio up and down killed me on time. Further killing me was the fact that his clock runs on military time and I was trying to enter more traditional AM/PM.

BUT… we cannot overlook that I actually entered lap orders all over the place. The problem was that if I’d clear a train to a location, I could only mark it’s location with a M (main) or S (siding) – very small and easy to overlook. Until I got used to it, it was easy to have trains cornfield. I’m looking at improving the display so it’s clear what the limit to the train’s authority is. Further, I’m going to make the program configurable to either time format (converting times from military to AM/PM while  putting down and picking up the radio while entering times while determining the trains actual moves proved a little much for me).

Besides the various problems above, we need to get a simple phone system (for the operators) and a headset (for my head). That would really help out.

A train runs through the gauntlet of poor dispatching (Photo: John DV)

But overall the trains all ran well on the rock-solid Kato track. The crews did the best they could with the static-crackling dispatcher (I talked one battery dead and was working on the second at session’s end). While there were a lot of switches left in divergent settings (and the recoveries for a shorting train were a little long – move every engine you can reach off every turnout you see when the layout goes down) otherwise the crews were on the ball. I won’t say how late we ran (we were already six hours into the next day when we closed the lineup sheet). But yes, with all that, everyone was smiling. Doc pulled it off – a great session and with practice (hint hint for another session) we can only get better.

So good job to everyone else. Not me. I dicked up my job, alas.

>>HEY, GET A BOOK SO I CAN MAKE ENOUGH MONEY TO NEVER DISPATCH AGAIN<<< 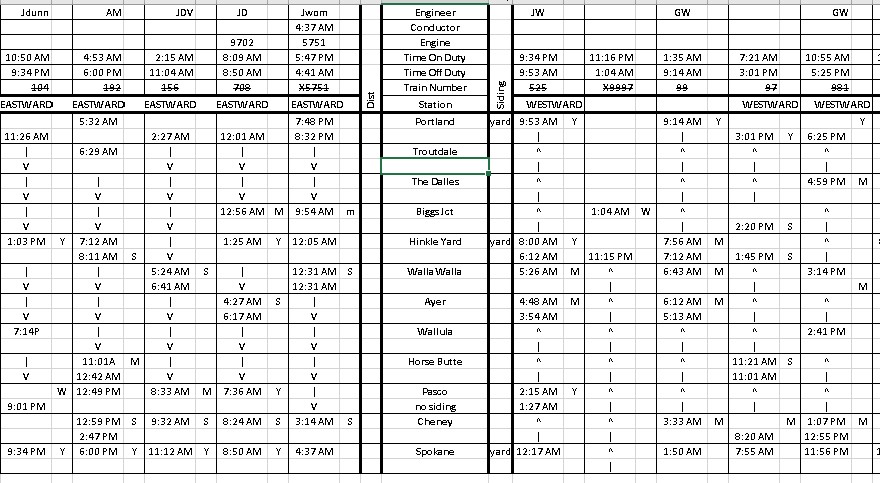 A portion of the final dispatcher sheet. You can see times recorded down on the left, up on the right.