staple of western drama (overblown western drama, indeed) is that of the misunderstood genius, one who dreams magnificently and throws himself into reaching efforts, only to suffer the destruction of his mad plans. In the end, he is left to croak in the ruins of his endeavors about how “it should have worked, the fools, the fools…!”

Look, I know you can get three trains past on a single siding. I’ve done it in warrants, on CTC boards, and various forms of mother-may-I. It is a stock in trade maneuver on the L&N (where sidings are short and sharp and trains rumble in nose-to-tail parades) and even on the LM&O (spend a night atop Harris Glen and catch the action as it happens over and over).

I’ll leave it as an exercise for the reader to figure out how three trains can pass on a single siding. But, yes, it can be done.

So after shadowing Dispatcher Phil through his paces on Al Sohl’s Western Bay Railroad, I felt ready to finish the final quarter-session on my own. Took the panel, slipped on the headset, got comfortable with the radio. Time to give this railroad a dose of DS efficiency. Nobody would be waiting for orders. I’d issue those famous cross-the-layout commands I was famous for on the LM&O, the ones that would leap the Silver Bullet from Pittsburgh to Cincinnati in a single warrant. So as I was turning 121 in Navajo for its run back to Denver, I wasn’t too shocked when two extras sprang into being, one to the east, one to the west. I could get them all through Dulce (a sleepy little Rockies town) without any problem.

People who heard the orders started popping their heads through the curtains. “You’re mad, Raymond, mad!”. I assured them that this maneuver was nothing special, just a standard two-past-one trick. Even the superintendent was looking doubtful. I didn’t see the problem. But then again, I didn’t know the railroad and the crews.

Okay, the first miscalculation – 121 had already been through Dulce once. It had spent a lot of time there and I’d assumed it had all its switching complete. Turns out they had more, much more. I ordered them into the siding (with the eastbound extra ordered to follow them in under restriction, and the westbound ordered down the main). But when they got there, they broke the train into tiny chunks and began pushing it around.

My second miscalculation was thinking the crews would do what I told them. No, when 121 got to Dulce, they went down the main and plugged every inch of rail with cars. Was there anywhere they didn’t put rolling stock? They might have even shoved one into the local barber shop for all I know. And I had two inbound trains that I was having problems contacting.

So now everything was going to shit. I figured I might be able to save the situation – get 121 rebuilt, let the westbound extra by on the main, push 121 east and back it down the main as the westbound cleared, giving 121 full rights to Dulce once the dust cleared. I’d done this in Goodbee a year or two back on the L&N. But now the full mutiny was aflame. The superintendent chugged into town in his model T, thrusting his cigar this way and that. The phone lines were cut (121 refused to take further orders) and the Union was destroyed.

I don’t know about mice, but so much for my plans. 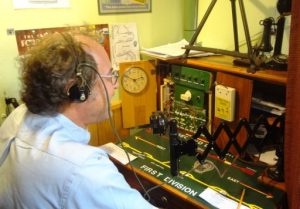 In the end, 121 and the eastbound extra swapped places (that’s a trick I’d like to have seen – I suspect magic was involved) and everyone continued on their way leaving the town in ruins and the railroad in shambles. And me with a whole container of eggs on my face.

I suppose there is a lesson there. Yeah, the three-by is a pretty slick trick, but the MBRR is a mountain narrow-gauge railroad. They don’t run under spit and polish rule-booking like the lines I run on. Things are more informal. A lot of time, crews “work things out on the ground” as we LM&O dispatchers call “letting the monkeys play it out”. And they don’t take kindly to know-it-all dispatchers telling them what to do.

Yeah, next time I’ll keep my moves simpler and make sure my meets are limited to two trains. And next time, I’ll make sure that orders are only good for a town or two, not places fifty miles away or years in the future. Next time, I’ll gear things down.

Well, if there is a next time after that debacle.

Watch this space for the answer to that one…

>>>LOOKS LIKE I’LL BE BACK TO WRITING AFTER MY BURNOUT ON THE WBRR. CHECK OUT MY EARLIER WORKS BEFORE NEW ONES ARE WRITTEN IN MY NOW-COPIOUS FREE TIME. FOLLOW THIS LINK<<<