n my real job, nobody listens to any suggestions I have to offer. And it’s a cock up there.

But on the Western Bay Railroad, at least some of the things I say get put into practice.

Like today – I’m sitting in the small office (more like an outhouse with the hole boarded up) in Placerville Jct. I can see train 315 toiling up the long grade from Ute Jct, a steam engine on the head end, another behind the tail end passenger car*, shoving.

The last times we did this we met with various levels of success. Usually trains have to stop at stations, and stopping a two-man circus like a mixed train on a grade can be a handful. But I’m running the station and Rob is doing a sterling job dispatching. So I try to slip a little more realism into the game.

Rob blinks (I can hear him from here) and then asks if it’s 391. I affirm that, then ask if I can clear him through. This means no stops, just a rolling OS. Rob agrees. As the crew comes up, I tell them I’m flagging them on – no orders. I OS their passage to the dispatcher as they roll past.

And that was smooth. The helper got 391 to the top of the grade without incident, then rolled back down the Ute Branch (I OSed the helper through as an extra, white flags). I was happy to see the work – maybe it will become policy.

Afterwords, in the debrief, Al gave me (and the late Bruce Notman) credit for bringing them into more serious operations with station agents. It seems to work well, well enough that I’m proud of it.

Nice to see an idea succeed. And to get credit for it. Unlike work.

* Helpers on the back of a passenger coach. I know. Rome wasn’t build in a day. I’m working on that. 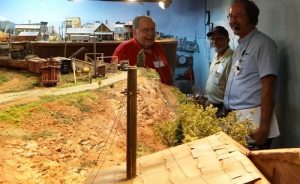