t’s one of the ops sessions for the 2020 Protorails, and I managed to get the golden ticket, a shot at running on the West Virginia Northern, a line way way over in Tampa. Worth the trip.

The Komars have an absolutely amazing layout. Wide aisles (well, as wide as you’re ever going to get on a layout). Wonderfully working equipment (transition era). Stunning scenery. And a comfortable but doable session – not rushed and hectic but sequential in all the right ways. When I heard there wasn’t a dispatcher (my favorite job) I wasn’t sure how it would work but the trick with signals between towns was really slick –  I could almost imagine that there was a guy in a laundry room somewhere moving traffic along.

So, the name is what you get – West Virginia. Coal country. Gritty little railroad towns. Heavy steam lugging hoppers up assisted grades. Switching here and there. Tiny little branch lines wending off to who knows where. It’s one of those layouts where you can lose yourself in time and place for an afternoon and just enjoy, well, the shit out of it. 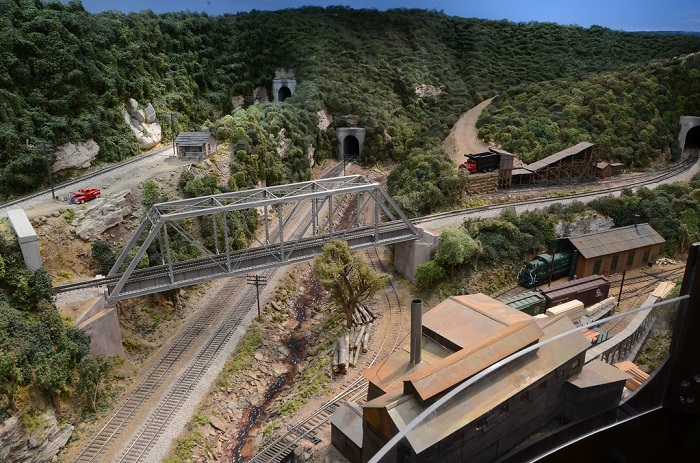 I was lucky to pick up a very enjoyable turn out of Clifton Forge (hey, it was on my dad’s old layout too!) to run over to Harris, a little town tucked into a river valley. Did my switching then turned my steam engine on the turntable to take my outbound cut home – saw Gail the hostess coming in the other side with her RDC run and realized I’d done all my allocated work in the allocated time. And this is slow switching – the engines have momentum and brakes and with all that, you really feel like you have to go easy nudging into your pickups and spotting your drops. But that was cool – followed the clear instructions back to Clifton Forge and tied down. For the moment.

The rest on the first shift was spend pulling coal down the long grade which is a great way to tour a layout. First cut was just straight through. And the second had work along the line, great fun!

After a very nice lunch, the session resumed with me working in the back hole (shown above) running three jobs – working a mine interchange, a small branch line (you can see it just behind the factory up there) and also the helper (not seen to the lower left, but I’d push all the way up the grade, namely across that bridge and then along the high ridge). I would just hop from job to job effortlessly.

Best part in the day was right at the end – I was in my helper on the main line track at bottom left and two trains showed up, a coal drag and a Pacific Fruit Express cut. Even though the coal was first in, I checked the direction and realized the PFE was running east, loaded and thawing. This being the case, I cut him in line and took him over first, working the signals to protect my block in the ascent, then swapping them round as I came back down.

All things said, Greg and Gail Komar have a stunning layout, one that I’ll suffer that miserable drive for. Thanks again for having me!