here has to be a reason I crawl out of bed at 6 AM, hitting the road by twenty-after, running west for Tampa to operate on the West Virginia Northern.

The sunrise in my rearview was breathtaking – the haze turned it into a giant molten ball imperfect with bands of clouds. Two cars pulled over on the side of I-4 to watch it. The rearview mirror gave me enough of a treat and a couple of miles more distance.

And the fast food joint I always stop at, I had a quiet coffee over a book, eating an egg-McSomething. Nobody was there, so it was nice quiet time.

And if I didn’t attend at all, I’d avoid the two hours on the road getting home, a frightening stop-n-go brake-burner of a drive. I could watch Netflix instead.

But no, I attended, the sun, the McSomething, the horrible drive home, and found myself on 151 working Harris as the room lighting slowly faded as the fast-day grew longer. Coming into town with a mixed bag of coal loads and general freight, I spotted out the hoppers quickly and was just indexing the freight for my return trip as 150 under a protected signal when someone called from the other room. Cody Case was on the Blackstone Coal run with Superintendent Greg as his helper – they were fishing things together in Elkview but would need clearance up when ready. Since I’d locked down the signal (so I could pull out onto the main to switch), I told them to call me when ready. I got another section parsed out and then they called me on the speaker tube (i.e. Turn Tunnel) and told me they were ready to come up. Gave them the board and pushed back into a clear yard track. It would take them a while to get there.

That’s when other-Superintendent Gail told me a hotshot PFE train would be coming west (wait, that’s empty, so why is it hot?) and I needed to let the coal train, the reefers, and the helper clear town before I could work.

“Huh,” I said, standing there with my consolidation huffing and hissing on the yard.

Well, I didn’t have room to maneuver a cut out but my teakettle alone would fit. I pulled forward (not fouling the main) and rolled up east through an empty yard track. I was supposed to do my work and then turn the engine before running back to Blackstone. Why not now? Rolled down, carefully crossing behind the idling helper, remaining clear of the busy Clifton Forge main, and eased out onto the turntable. Slowly rotated the engine around (you’ve heard of 45s and 33s? This was, I think, a 2) until I’d swapped ends. While I was slowly turning, the coal blew through east, then the empty reefer block west. I paced the helpers, them on the main, me on a yard track, down to the west end. Since everyone was clear, I worked the rest of the sorting with the pilot coupler, bunched the train up, ran around it, hooked up, and snagged the caboose on my way out of town, rolling through the simulated darkness. 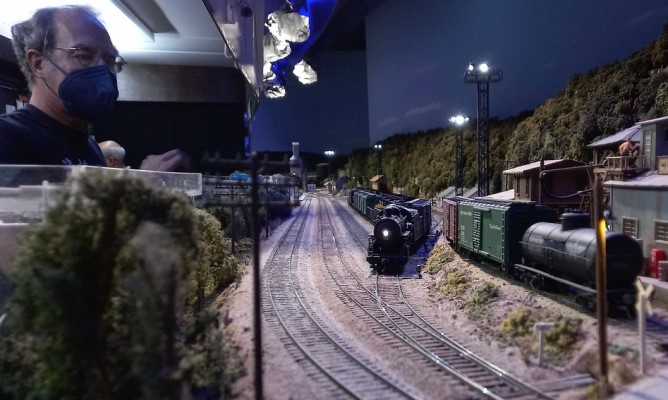 Two people, watching me turn the train earlier than instructed, complemented me on the move. If I’d only “followed orders”, I’d have been finishing up while everyone was gas-bagging in the next room.

So yes, complements on my idea.

That’s what makes it all worth it!

Thanks to the Komars for hosting their magnificent layout.