o be honest, I feel a little like one of those people who are reading Time Magazine at 30,000 feet, rationing my peanuts and trying to ignore the loudmouth in the seat next to me. The next moment, I’m waking up in a muddy field surrounded by wreckage, still strapped to my smoldering seat. First thought: what just happened?

The first shift on the Komars’ West Virginia Northern went really well – the railroad was clicking through its paces and we actually finished up a little early, allowing us time to prep up for the post lunch & meridian shift. Then we all sat around enjoying our healthy lunch. I had a cup or two of coffee. Smiles all around. Then we went back into the layout room and got to work. And, as HG Wells wrote:

Why are these things permitted? What sins have we done? The morning service was over, I was walking through the roads to clear my brain for the afternoon, and then—fire, earthquake, death! As if it were Sodom and Gomorrah! All our work undone, all the work…

In the afternoon, I signed up for the Ashbury Hostler job, just working the servicing tracks and turntable, and doing the mainline runs from center stage to Huntington. Clicked my way down the things to do list and was looking for the last seemingly overdue train. So I guess I was about done. 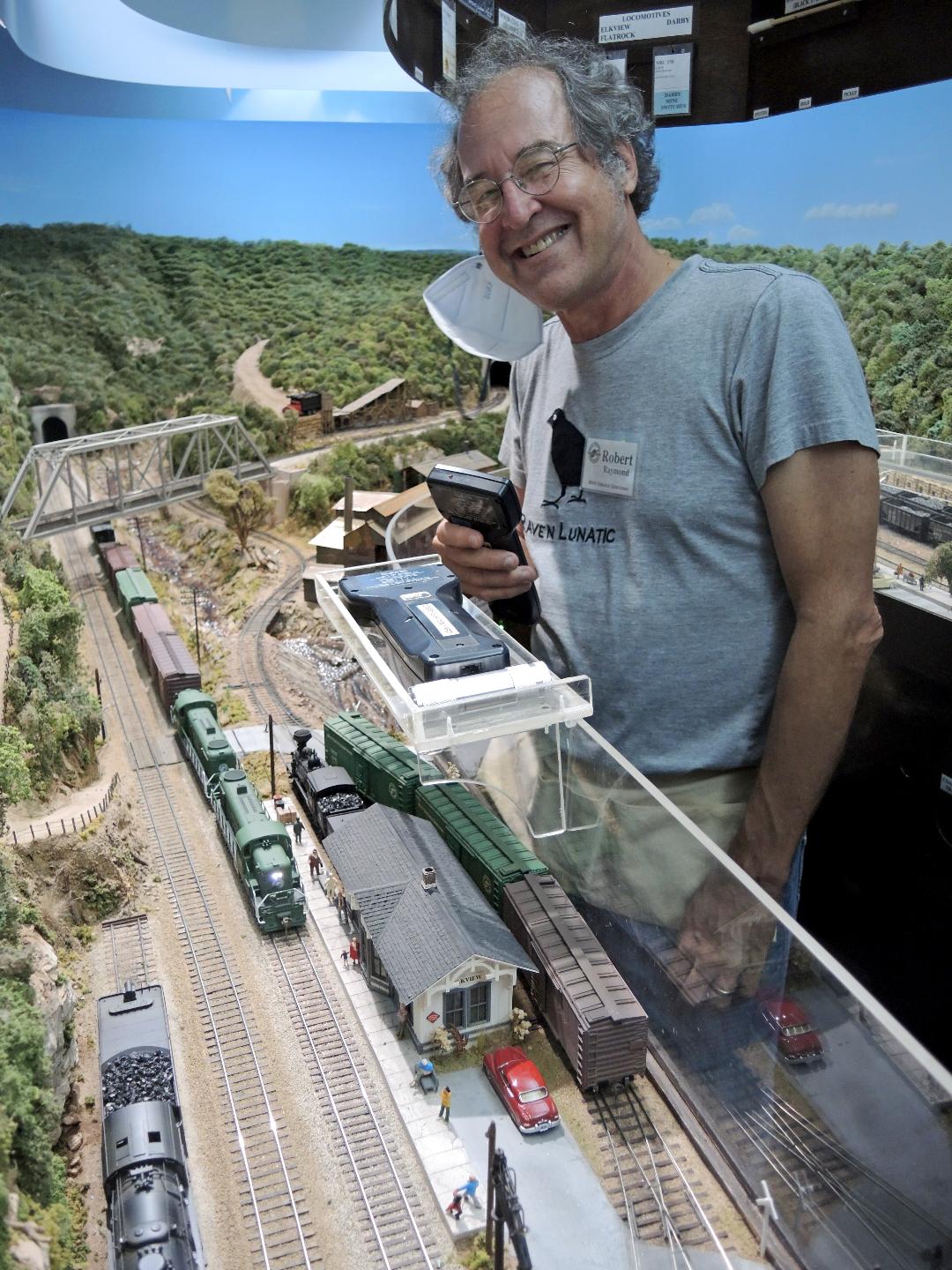 The Harris Turn works Elkview in the Happy AM shift. In a few short hours, the town would be in ruins and the pictured operator arrested by the ICC (Photo: Greg Komar)

Then hands grabbed me and dragged me back to staging – Superintendent Gail press-ganged me into road service. This late in the session and there were still bunches of trains to run. What?

I ran one freight and then tooled out a coal train. The light was failing (or, rather, dialing down). I came into Coalwood and managed to bungle the entry – didn’t take the siding. And after I’d backed up and gone in the correct way I ran over the mine lead turnout that was set against me (I couldn’t see it since aisle crowding had me eight feet away and the gloom was thickening). The engine cleared but three or four hoppers bit the cinders. Meanwhile the local operating at the east end was fussing about with pickups (unfamiliar with the job). The superintendent eventually loomed out of the darkness like a Shakespearean ghost and told the local to just skip it and keep going.

Once he cleared, junior-superintendent Greg (covered with coal dust from the mines, more of a Dickens’ character) coupled the helper on and we headed up the grade to Harris. And there we modified the rule from Apocalypse Now:

Never get out of the train!

The local we’d followed into Harris was pressed into a line of hoppers like a child in its mother’s skirts, trying to find a place to hide. And in the middle of a tornado of unspotted cars (literally in the middle – the engine was in the center of them) was the turn out of Keystone. The yard was packed with cars to be classified. By now, everyone was flustered and confused, mistakes were being made nonstop, equipment was running over unset turnouts at frightening rates. As for me, I was stuck on the main behind my helpers I needed to eject, but with all the activity there was no place they could go. We were deadlocked in the dark. And that’s when I realized Gail was standing behind me (I think that billiard-ball noise were her molars grinding). She stepped in and gave sharp orders to get the locals clear, the helpers off, and me out of town. We all yes-ma’amed and leapt to our throttles.

Maybe we could have saved this sinking ship. As soon as I got in at Clifton Forge, I took another train – it turned out to be the twin of the coal train I’d just run (I noted they should run hours apart but kept my tongue clamped between my teeth). Ran through the identical motions (and yes, this time I went down the Coalwood siding). Had a deja vu moment with Greg as we hooked the helpers back up for chapter 2 of the coal move. But now we realized several things…

1) There was a PFE reefer block, overlong, waiting in Harris to move against us.

2) Harris was otherwise jammed, no available tracks for us to meet him there.

3) We were too long in Elkview, so the PFE couldn’t meet us here.

6) The Komars were at literal wits end.

Well, I always feel a little guilty doing my bit to crush the souls of nice people. But regardless of my reservations, the session was called on account of hopelessness (in the same way the atomic bombs forced the Japanese unconditional surrender).

Yes, I’ve had session on my home layout where I finally just said, “Out! Everyone out!” It happens.

But really, I’m not sure why the same crew that ran so well in the morning fell apart in the afternoon. I’m just sitting here as I write this, wondering how much I might have contributed to the shambles (I think I might be repressing memories).

But I hope the Komars realize (if they even get this far in this post) that I still had a great time. As always, my engines ran perfectly, controlling with throttles and brakes is still a wonderful experience, and just running trains in that three dimensional work of art is worth everything we went through.

I mean, after this, how could it have gotten worse, right?

Well, I did get lost driving home by a new route north and ended up in The Villages.

I mean, me, the downtown cool urban guy.

Seriously, Gail and Greg, thanks for allowing us to run your railroad, even sub-optionally.

>>>BUY A BOOK OR SOMETHING DOWN THIS LINK<<<