So you’re sitting around one night, poised in that indecisiveness readers occasionally flounder into. What next? Science Fiction? Steam Punk? Magic? Fantasy?

Why not all of them, wrapped together in a plot which chafes so delightfully?

China Miéville is a London author – it shows. His city of New Crobuzon is a sprawling, dangerous, vibrant, cruel place, a fun-house mirror image of London. Steam-technologies work. Magic (in a limited yet practical form) works. The city is a melting pot of story types and urban fears. Presumably New Crobuzon has a positive side, a side of decent people, quiet suburbs, theaters and museums. But hanging around with the likes of Isaac Dan der Grimnebulin, we never get to them. No, we base our stay in the dirty sections of town.

Where London seems to be coping with interracial issues, New Crobuzon faces problems of interspecies. There are cactus men, winged Garuda, and Khepris (along others), all living in their sections of town, all bringing down each other’s property values. In fact, our main character Isaac is dating across the species line, taking a khepri lover (who has a woman’s body and a bug for a head – creepy). But he gets along with Lin well enough, and he’s got his interests, specifically the difficult assignment of fabricating wings on a Garuda who’d had them sawn off for some unspeakable crime against his people.

The thing I loved about Perdido Street Station (and its sister books, The Scar and Iron Council) is the scale. New Crobuzon is a sprawling city existing on a massive continent, surrounded by dozens of half-understood seas. 5000 miles away, there is another city and culture, but the New Crobuzonians hardly know anything about it. It is a world where pictures of dragons are drawn on maps, not in art but in warning. It’s a place where no matter how many steamer lines and telegraphs are thrown out, you can never know it all. It’s a gigantic world where everything is possible, everything discomforting, and everything is sinister.

Buggy Lin is asked to create art for a dangerous mob boss. And Isaac’s searches for an avionic solution to his Garuda’s problems are leading him down some dangerous paths. Slowly the truth unravels, truths about cationic victims found babbling in alleys, of the mob’s involvement with horrific winged creatures hunting across the city, of the government’s contact with demons. And when the black threads of the plot finally come together, the reality is almost too terrible to believe.

I liked China Miéville’s writing – it is a mixture of Victor Hugo and H.G. Wells, with a touch of Lovecraft to spice it. It’s long and sprawling and bombastic and unsettling. I can’t recommend it enough.

>>>JUST AS I CAN’T RECOMMEND MY BOOK, EARLY RETYREMENT, ENOUGH. GET IT HERE!<<< 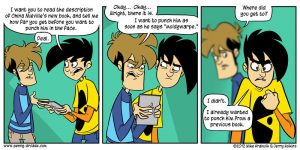