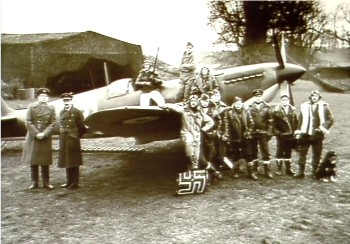 So why do I like Piece of Cake, outside of the fact that it’s a World War Two flying story?

Well, as a writer, I love the book because it does two things I respect any book in doing. These are…

1) It takes a perception of our world (here, the nobility of “the few”) and skews it.

It turns out that Hornet Squadron is made up of infallible, bungling, selfish, vain, and stupid humans. The squadron CO taxis into a slit trench the first day of the war and breaks his neck while trying to angrily clamber out. Later, there are bungled attacks (as fitting with the RAF at the start of the war), bureaucracy and confusion. And the pilots? There is a shirker. A brute. A know-it-all Yank. All led by an upper-crust yob who treats the squadron like his own private flying club and blindly follows fighter command’s dictates, no matter how stupid they are.

Robinson writes strong. His flying scenes are top notch. He knows how to write areal confusion and panic, and also the beauty of flying. And he knows how to write people; his dialog chatters along like a crowded mess on a rainy afternoon, snippets and inside jokes and cutting remarks. He did much the same in his earlier Goshawk Squadron, and he pulled it off here as well.

I’ll mention that, in regards to point (1), the book was stunningly adapted into a Masterpiece Theater six-parter that followed the high-points of the story fairly well and brilliantly cast its characters (so when I read it now, I see the actors in their places). Apparently there was a swelling roar of indignation among the Brits over this. The could understand point (2). They didn’t get point (1).

But I got it. And I liked it. So Piece of Cake gets a recommendation from me.