Finally, this is the day we actually made it to Switzerland. While most of what I said for the 13th involved the early morning disaster, the second part (waking up at the hotel, having breakfast, then getting a cab ride back in to sit around and casually await our 6:55pm departure) went by pretty smooth. We took off and flew for most of the night, meaning that by Saturday, we’d made Zurich.

Even though UNITED AIRLINES told us to our faces that the luggage would be on our flight (“Yes sir, sitting right there. I can see it on my computer”) it turns out that UNITED AIRLINES’s baggage handlers were sharper than their gate agents, because while we didn’t make the flight, the luggage had. We came into Zurich, waited at the carousel and had that disappointing moment when you’ve seen all the bags there are and the belt stops. Show’s over, folks. So we went to lost and found with our receipts and passed them over and there were our bags, slobbering happily that we’d found them.

The Movenpick Hotel is a bit more upscale than the Jersey Holiday Inn. It’s so posh here – we took showers when we got in and when you turned it on, the shower actually played music (along with mood lighting – I’m not joking). I felt like I was in a disco – green and purple lights – but it actually was really nice. 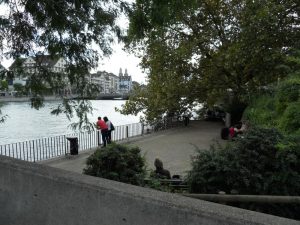 We purchased tram passes from the desk so we could go down to the center of Zurich for the day. There was a bit of confusion working out the tramway – the people on the platform were very pleasant in pointing us in the right direction. We got on the correct train and finally understood their extensive system. So into town we rolled, marveling at how nice everything was, how scaled to human proportions. Here and there were gardens, fields, trees. The emphasis was on people moving in a civilized fashion (pedestrians, cyclists, trams, busses, cars) as opposed to grubby post-apocalypse New Jersey (cars, cars, and cars, and F-U, you bum!). The contrast was amazing. 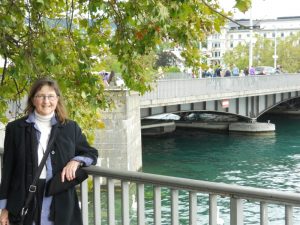 So we got off at the central tram dropoff, just at the north end of Old Town, and wandered down to Lake Lucerne. Such a beautiful place! There were cyclists galore, all ages and speed-levels. All the bikes had that fendered, lock-tossed, work-a-day look to them. In the end, after looking down at the wonderful lake backed by snowcapped mountains, with sailboats dancing across its clean waters, we found a little streetside restaurant and had a wonderful meal (meal and tram both pretty much ate up my hundred Francs I’d pulled at the airport – so the cost of living is a bit high, but look what you get!). By the time we were done and our tummies happily digesting food not produced by UNITED AIRLINES, we sleepily trooped back to the tram stop and rode back to the room, our eye-lids fluttering with SandMan dust.

It was a very nice outing, and a good way to re-start our vacation.