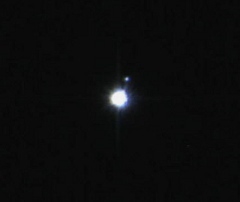 he real purpose of tonight’s jaunt into the backyard with the scope was to check the alignment of the spotter and laser sights – I’d knocked them off putting the tube into the trunk of the mini and wanted to check them. Tonight was fairly clear, so sure, at the very minimum, a little calibration.

Turns out they were pretty close – since now it was well dark and I had an assembled scope, I decided to look around a bit. Had at least one thing on the agenda – I’d heard of people actually seeing binary stars but had never managed it before. Rigel’s a binary, and I was actually pointed that way. So let’s look for it.

At 24x, I just saw a bright star. Looked at it for a bit. Focused a lot. Nothing. Bumped up to 60x, and still didn’t see any second star. After this, I got the barlow extender out and boosted up to 120x. And still, Rigel was just a bright light in the sky. Frustrated and wondering if maybe I was the victim of a colossal cosmic snipe hunt, I even slipped a low light filter on the eyepiece. And then I did what all astronomers do best – I settled into my chair and just… looked.

Eventually I realized that there was a tiny pinpoint to the side of Rigel. At first I thought, no, maybe it’s just a distortion of the lens. Removing the filter (and knowing what to look for) I could now make it out quite easily. And there it was. Later, I checked actual pictures online (such as the one included here) and, yes, that was the binary. Proud that I’d finally “made” this view, I hung out on it for a further half-hour.

Then it was general viewing. Of course, checked out the Orion Nebula (some day I’ll have to go through my posts and see how many times I actually recorded it. Other than some summer sessions, I think I always look at it). Then I decided to go hopping. Picking M41 (the Beehive Cluster) hanging off Sirius, I cast about a bit and easily located it. It’s a cluster not quite on par with the beautiful Pleiades, but in a light-polluted sky it stands out. Anyway, always glad to get another Messier object checked off.

Oddly, I did notice that the focus play on the barrel is a bit stiff. Wondering if it needs re-greasing. Better check at the astronomy club in a few weeks.

>>>SINCE WE’VE GOT A FEW WEEKS UNTIL THEN, IT’S THE PERFECT TIME TO CURL UP WITH A GOOD BOOK – MINE! FOLLOW THIS LINK TO MY AVAILABLE TITLES!<<<