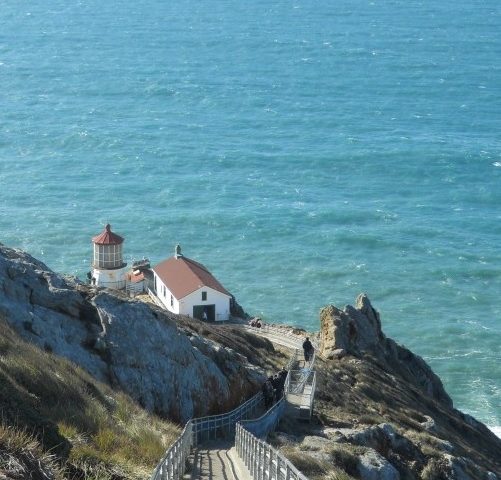 oday was a big off-site family deal, everyone into the van and go. And for this, we wheeled out Moby Dick (the massively unwieldly van) and headed out towards the bay. Best yet, the weather had broken gloriously and the sky was a radiant blue. 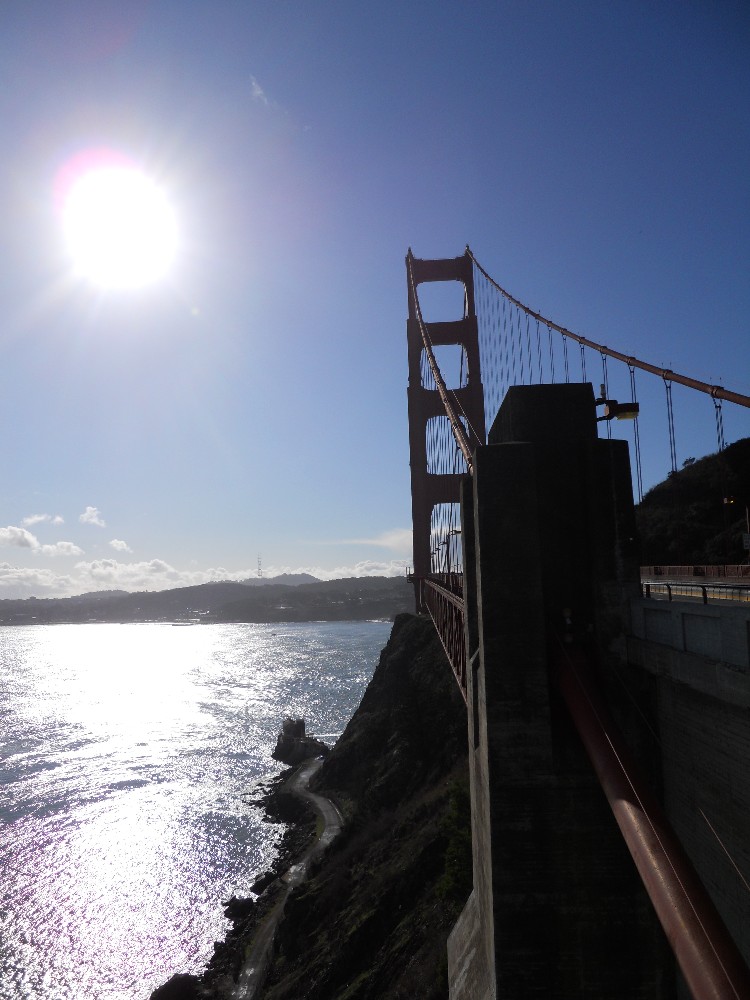 After a three-point turn-around or two, we finally got ourselves dropped on the Golden Gate Bridge’s south side park. From there, we snapped our pictures of that massive bridge (the same ones you’ve seen everywhere, even here) and then started out across it. Now, the west side, it’s only for bikes. Our side is pedestrians. Now, this was exacerbated by the fact that they were running some sort of cross-and-back-and-cross-again foot race (the same joggers in the same blue shirts). But out we went, wind crackling, traffic blowing by. And I’ll say this, if the devil of vertigo occasionally rides your back, you’ll feel him hanging from your shoulderblades on this walk, whispering about how high it is, and look up at those towers! Gulp!

But we got across. By the second tower, I was pushing this troublesome genie back into its bottle, actually leaning back to look up (gulp!) at the high towers and even take a couple of pictures. Eventually we got to the other side and picked up our van again (my brother had ferried it across). And off we went to the Point Reyes lighthouse.

Now, nobody had asked my opinion on how far forty or whatever miles was really when you were driving along the Pacific Coast Highway (my wife and I’d had our own experience some years back, south of the bay, when it took hours just to cover crow-fly distance). So I just read Moran’s Earth Winter (review pending) while getting shaken like a bean in a can as we hamfisted about on the narrow twisting roads. Yeah, I have issues with vertigo, but motion-sickness, no problems.

We finally got there and it wasn’t quite what we expected. Sure, you had to walk a long windy half-mile just to get to the site (JB and I 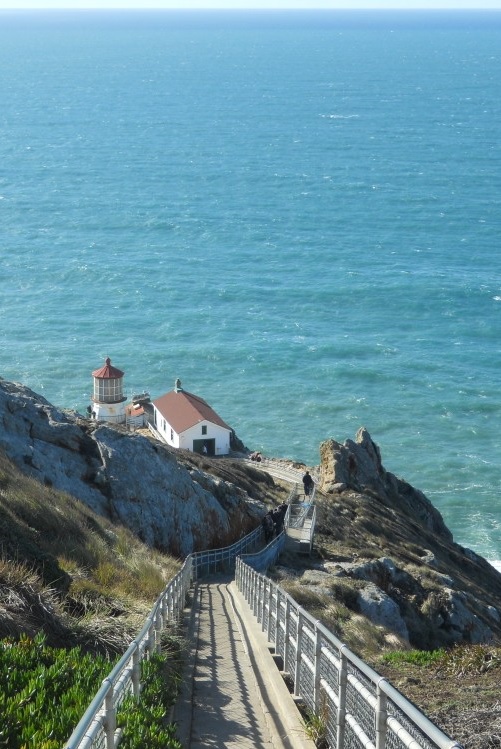 had a large deer cross our paths as we walked under the wind-wrenched Cyprus), and yes, there were 30 flights (no exaggeration) of stairs to get down to the actual light house (a little dinky thing). The wife remained topside with the older ladies while I descended. Got some nice pictures and tried to record the sound of the fog horn with the camera (the wind noise turned out to be too much). And then I climbed that long slope, puff puff puff. But I made it, pretty much in one go.

This evening, everyone else went off to see StarWars. Now, yes, we’ll probably see it soon, but the thought of riding a bus to an opening release in a strange city, fighting for a seat and all that, no, not fun. Instead, JB and I had our own nice little evening; quick walk down Haight (I’ll use colorful here as a euphemism for seedy) and dinner in a nice little burger place. Interesting meal – we chatted while all sorts of strange people came in and the homeless circled about in the darkness like wolves. Ice cream afterwards. So Haight’s really become the new tenderloin district with gentrification crushing it from all sides – all sorts of colorful counter-cultural shops, every alcove filled with a crumpled human being, every sidewalk clotted with smoking, ill-used men, every cross-street lined with million-dollar houses. When we came home today from the outing, we found a guy literally passed out on the sidewalk – we weren’t sure if he was alive or dead. And now, when we came back from dinner, we found our own hobo jungle out against our garage door, at least three guys with their bundles, blankets and bottles spread about. So, yes, this isn’t the best place to stay. Even as I write this, I can hear one of the tramps yacking away profanely just under our window, a very colorful backdrop for our vacation. I could find this sort of ambiance just outside a rail yard. Great. Can’t wait to see what’s down there tomorrow.