ow much fun can a train show be when it starts with you sitting in your car in an empty fairgrounds in the pre-dawn dark, feeling a kidney stone grinding through your guts and hoping ferchristsakes that that pain pill is going to kick in and theburning agony will end?

Well, quite a lot of fun, it seems.

Set up had solid attendance – lots of membership showed up and the layout went up nice and easy. We had eighteen feet of new scenery, mostly forested but with some scratch built structures (some even showing up the day of the event!). We got it rigged up and running in about an hour. And then the show began. 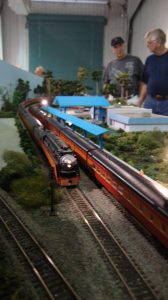 For me, it was an odd show, drinking water the entire time and using our new passing siding to store my train while I’d go pass more water into the urinal (Drop, stone! Drop!) But it was a great run – I had my ConCor GS-4 (my Kato having fallen a thousand scale feet to a simulated hard-as-rock floor and smashed into a hundred tear-stained pieces); I’d decided to run the red beast anyway (haven’t had it out of the box for three years). But she ran sweet (a little derailing at places, but with that long four-axle driver set, to be expected). Had ten nice Kato coaches strung out behind it and found myself running opposite Matthew (with his own daylights, drawn by a duckbilled PA-1). And, with Ron parading a newly purchased cab forward (with sound!) (who would have seen that coming?) it was suddenly a western railroad!

So yes, we ran and had a great time. There were so many trains out, we were running yellow on most signals (the old hands know to run easy and keep distance – the kiddies we loaned throttles to ran up on the reds and had to wait). But that meant we had seven or more trains rolling through our scenes – pretty good indeed.

Early on, Jeff utilized our new passing siding to pull his grain train in and let two passenger trains get by – that was the neatest thing to watch at the Folkston Jct, the signals clicking through their indications, the trains making their railroady moves, everything looking so sweet. Still, shortly after (at 10:30 or so) I pulled my daylight varnish into the new Amtrak station and declared that I’d just made our first station stop. At that point, two or three other engineers told me that Pennsy, Amtrak, and I don’t know who else had already stopped there. Yeah, everyone, even the kids, wanted to make station stops.

In the end, we ran the layout hard, had trains in and out neatly using our two yards, and had some great running. The takedown was a snap – everything went down in a casual 20 minutes and we were out the door.

And, best of all, after a lot of water drinking, another pill (last night – aggh!), I think the stone is out. It doesn’t hurt.

What more could anyone ask for?

>>>WELL, MAYBE A GOOD BOOK TO READ. AND I’VE GOT SOME HERE – CHECK OUT MY HISTORIC FICTIONS AND SCIFIS AND SEE IF THERE IS SOMETHING YOU MIGHT LIKE. FUN READS, DIRT CHEAP!<<<