was able to attend the second day of the two-day train show (given that the proceeding three days had involved three operations sessions with hundreds of miles of highway driving and physically being on trailer duty for build day warranted a day off on Saturday). Got in at nine in the morning and started cleaning track.

Overall our second show day was a pretty good day. We had a lot of visitors and a lot of kids got to run. Me, I ran black widow F3s with a long freight lashup behind them. It was pretty good running – other than a flood of trains in mid-afternoon, usually I was running with two or three others. If I eased back on the throttle for yellows, I hardly ever really had to stop. I think I ran in the mid-throttle range for most of the afternoon (other than the surge). Beats having to stop and start all afternoon. I got enough of that on I-4 to Tampa a few days back.

The worst moment was when someone recognized me from the NMRA and wanted to talk internal politics while I was gliding my train along. I don’ even want to talk real politics, but organizational politics – bah! I just nodded and grunted and eventually he went away.

The best moment was when I was trying to get into the yard. Bill was trying to film using a camera on a pushed flatcar. I was head-on to him, trying to divert into Bowmen yard. I was about halfway in with my long freight when Bill came up, talking to a guest. In that, he ran the signal and plowed into the side of my train, knocking several cars over. Then, the camera itself flopped off the side of the flat, landing on the soil. Later, watching the video, we realized that this was a keeper. You’ll laugh, you’ll cry, you’ll kiss three bucks goodbye… 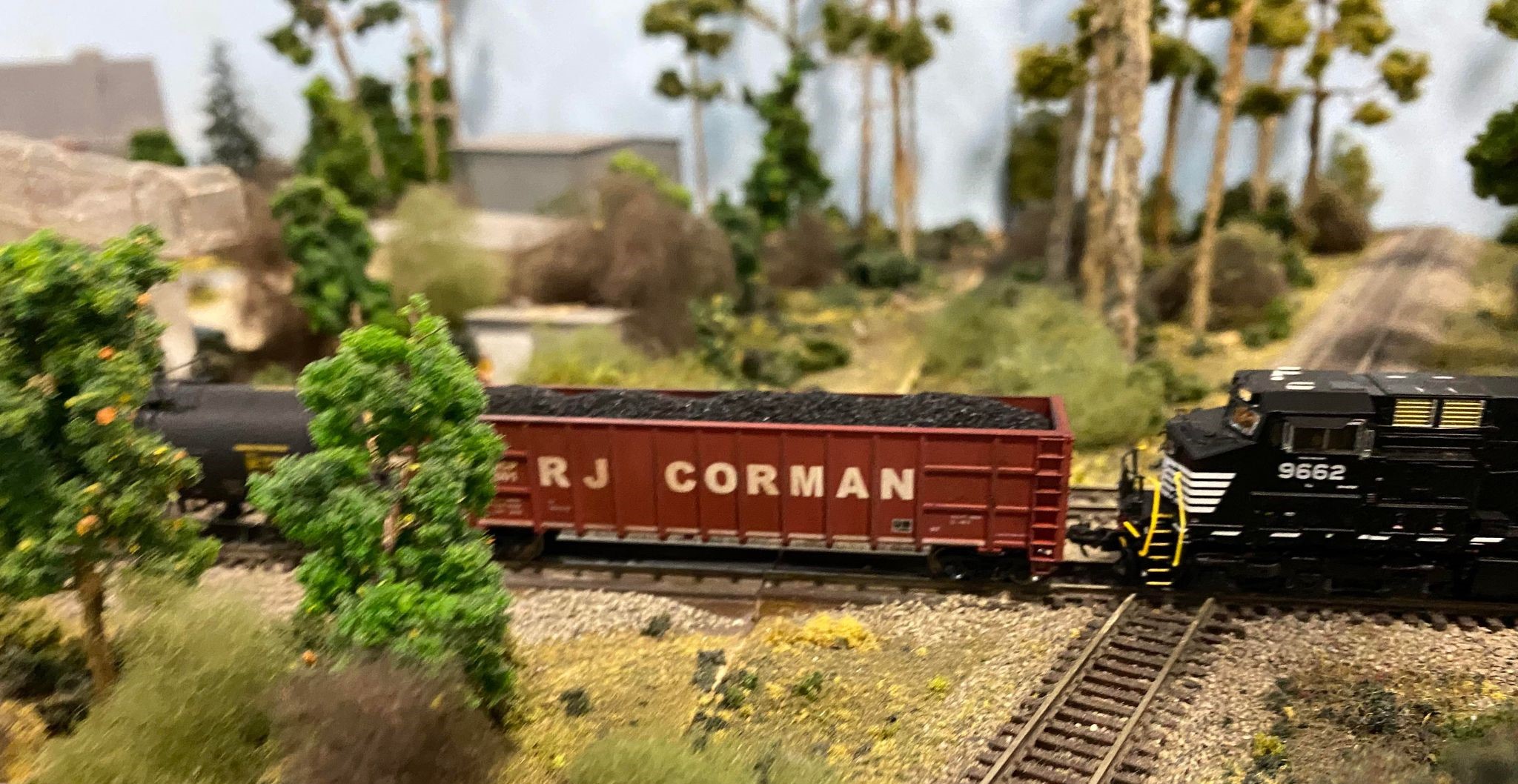 A hotshot NS freight storms across a level crossing that really doesn’t exist in Jacksonville. But hey, whatever… (Photo: Mike A)

I’ll add this in closing. For everyone else, the train show ends when the ramp goes up and we hand our our atta-boys. However, for Bill and I, we still have two more hours of effort. First, we need to go to the club to unload (I have to get there first to open the gate for him). And then we need to drive the empty trailer up to Bob’s place in Geneva. Nothing sucks at 5pm than grunting and huffing to hand-crank that trailer up on its wood block so the truck ball will clear. So, yes, we need to start sharing that duty with eager younger members. I mean, Bill and I don’t want to hog all that late-afternoon fun…

Anyway, good show, guys. We made some money and put ourselves into the public eye. And all the other shows will be easier – one day short shots. See you then!