What can we say? When we opened the truck, we found one of the racks had shifted – scenery damage! Then there were the arguments while setting up, and a member storming out. Then, when we did get everything together (it took two hours – people were coming in the door), the layout didn’t come up until after lunch. What a terrible start.

Forgive me – I know it’s no longer April 1st, but I had to do that for the benefit of the committee member who is bobbing about on a gulf cruse while we all did the show. Just a little fun at his expense. 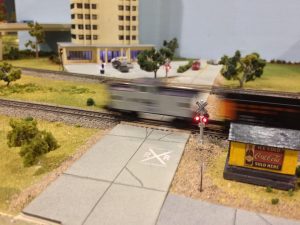 None of that happened. The layout was loaded in 10 minutes on Friday. Today it went up in 45 minutes. One turnout motor dropped loose but it was the most unimportant one, we never missed it. We ran trains all day with only one fault, and we suspect a button-pushing guest might have turned off the layout.

One thing I will mention – the crowd was a bit more difficult this year. We had lots of demands for running but very little in the tip jar to show for it. And the kids seemed, well, to put it gently, dumb as posts. They couldn’t run slow, they had to be watched, and they touched and poked the layout directly under the gaze and in the presence of their parents. One little girl started to try to pick apart the manatee sign on the harbor scene and I told her to stop – only after I’d stepped in did her parents take action and gently chide her. What, would they have stood back, smiling, as she upturned a can of gasoline on our modules?

But overall, I had fun running my trains and getting in mileage. The layout went back into the racks like a dream, four guys clicking them into the carriers like clockwork. And the club made some money, so that’s good.

Nice to be home.