ell, it’s been a while. With Covid, it’s been over a year since we did our last Volusia Fairgrounds show. I had concerns (as I always do) about layout functionality. However, we set up the day before (just in case) and found out that everything was fine and dandy. One turnout needed a bit of TLC, and one section of track lost power. All easily fixed. Then a number of cleaning passes and we were good to go. We even logged our normal setup time – about 1:15, so yay us!

The show was something else. Me, I was in a mask the entire time. I’d say making was 1 in 10, so yes, I was good with hiding behind it.

As for the show, well, we lost some members over the last year to moving or simply dropping out, but what we’ve lost, we more than gained back in enthusiasm. Members picked up the whole way the railroad works. We didn’t have too many troublesome trains, people ran at pretty good speeds and I think I’m the only person I witnessed rear-end another train (and that was trainmaster duties getting in the way). Everyone ran slow and steady, and all the equipment was sound. 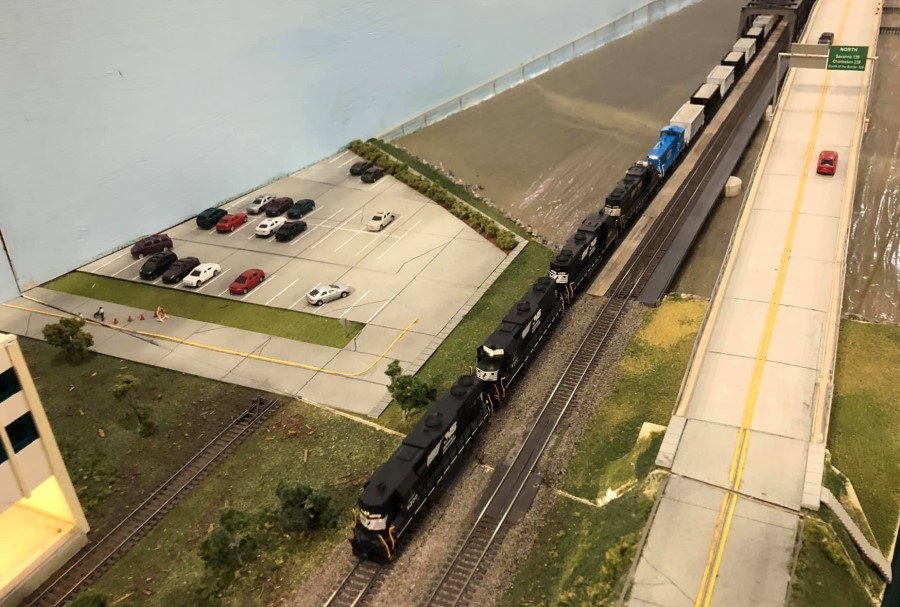 Our major problem is that with all the enthusiastic members, we had some significant traffic surges through the show. I’d be running without a care in the world, all greens, and then members would pour out and it would be yellow and red boards and stop and go movements. I’d tell myself that if I ever got to staging I’d get off and lighten the load. However, everyone else  decided this too and just as quickly the layout would empty. Since I was running most of the time, I actually remember pushing through three back-to-back surges. Crazy but fun.

I still need to make sure that those people using the Bowden stub yard need to know how to use the crossover to get in. Backing through an S-turn across two seams is just a good way to plow up cinders. But if that was the worst problem, well, we’re gravy!

Takedown was simple. The members listened and too their time. I’ve got one problem I need to work on Monday – it’s a minor thing but there you go. So it was a good show – we made money and got a lot of good things for the layout besides. So outside of the rock in my windshield, my sun-rotted antenna, and the 100+ mile round trip when we magically found our trailer parked in a no-parking zone, it was a lot of fun!