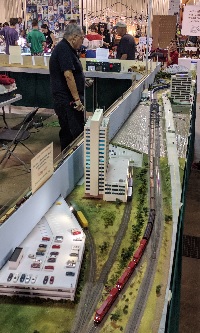 akers Faire is a big crazy thing down at the fairgrounds every year, a place for all the droid-hoppers, 3D-printers, steampunkers, and general kooks to show up at – it’s like a county fair for nerds (not that it’s a bad thing). And since we’ve “made” this massive layout of ours, 90 feet of distance from one end to the other, it’s only appropriate for us to display there.

Half of the monster train (Photo Credit: Frank Z)

So we set up Friday and Saturday at 9am trains ran. And ran and ran and ran. At a minimum there were three out at any time, and occasionally you start hitting red signals once eight or more hit the high rail. And that’s pretty impressive when you think that it’s non-stop for us, ten hours Saturday and seven Sunday. People pull into Bowden Yard to break for lunch, or go see the sights, or just collapse in a heap on a chair. But still trains roll on. Think about it. You walk from one end of the layout, ninety feet around to the other end, then walk back. All this while watching your tiny signals, making sure your train is together, answering questions and keeping little fingers (and some bloody stupid big ones) off the layout.

I noticed that running a show like this is kinda like being a real engineer – not because you are running a wee little train, but because engineers are special and different. A real engineer rolls through towns, waving at people at crossing gates, but pretty much being above and beyond mere trackside mortals as they fly along. Same thing here. I’ll be strolling along, answering questions and nodding at people’s compliments over what we’ve achieved, the scenery and the trains and the scale modeling and all.  But they aren’t club members. It’s when I’m walking and I see distant headlights and there’s a black shirt, a club member, and as we pass we nod or exchange information – someone’s bollixed the line north, or there’s a pretty mallet coming up from the south, or there’s a kid who keeps touching things. You might think we’re just running trains, but no, we’re guys who know how this layout works, how real railroads work, how model trains work. We chat amongst ourselves and suffer your questions about how much it costs and how fast they go.

Like today – I think Bob K. ran out the most miles. I’d pass him over and over on my run between little Jacksonville and soon-to-be Folkston, just passing his UP PA unit, sharing a joke and a laugh as we moved down the line, keeping the show running.

Really, if Makers Faire wants to highlight making things, they should have us build and take down the layout with an audience. People would be amazed if they knew how slick this was. Tonight we struck the layout in sixteen minutes, pretty much a casual pace for us, but people in nearby booths (struggling to take their own displays down) marveled as teams of four would go around each modules, two on the sides, two on the legs, one, two, three, up. Legs are off, module into the rack, legs on the back and on to the next. It’s really amazing to watch.

I gotta admit that while there is a bit of bitching about people running long trains, I have to say that I enjoy it. I ran a forty car freight, about ten feet long. But Bill ran out a seventy car CN grain train with a midtrain helper that snaked back nearly twenty feet. It was amazing to see that thing just go by, and keep going by, and go by some more. Wow. That shows how well our modules work – doing that on a show layout.

Anyway, it was a good show with some very interesting (and tip-generous) watchers. Who knows – maybe we’ll pick up a member or two. They’d be fools not to. This is like nothing you ever get to do, a show like this.