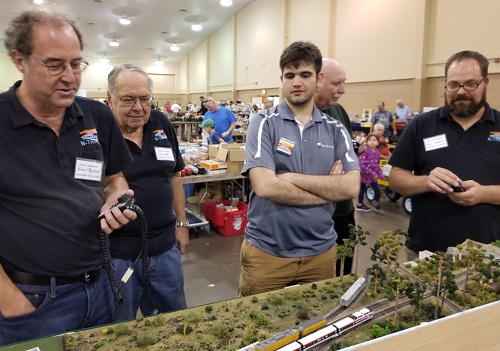 his was a new one for us, a long ride over to the west coast for a show. Of course, there were two club-related hospitalizations and heavy rains to cope with, but other than that, everything went well.

We managed to hold to our schedule and everyone showed up. Unlike Makers Farce, we had more than enough people to do this and everyone pitched in. Better, we all proceeded slooooow, so outside of the sign stand breaking (again) we set up in our usual hour and had things running when the crowds came in.

Overall, the show was a real success – strong crowds and we were swarmed (but not in that breaky-way we faced at Makers). People were enthusiastic to see our layout in this new venue. And everyone was running – lots of trains and lots of complements.

The nice moment came before my end of the show (a number of us were going back early to make it to the Club Christmas Party). I’d been pulling the club’s business car (the Bithlo) around on the back of my PFE train, basically playing the part of the president of the line. However, this is my last show as president. To commemorate this, right before heading for the yard, I pulled up to the Jacksonville Amtrak station and dropped the business varnish off on the interchange track. Then Frank (the incoming president) backed in and coupled it up. With that, I ran back to the yard, broke the train down and headed home.

Off with the old, On with the new!

Overall, it was a very good show for us. It goes on tomorrow but I won’t be there, so I wish the boys well.

Oh, and the Party – great fun! One of the best parts was Cody and Bruce battling like gods over our railroad trivia contest.

Thanks for the great term, guys!