ith total respect to the Japanese as a people, they have a crazy-strange culture. I’ve been watching their animation (“anime”, for you non-hipsters) for ages. Yes, a lot of it is the unimaginative same, merely riding on the shoulders of giants like Cowboy Bebop and Akira. But some of it is really, really good – from a storytelling aspect.

One such piece is Steins;Gate. It’s a story about a young Japanese nutcase, a scientist-goofball with a make-believe lab who jabbers commands to his non-existent organization over an inactive cell phone and runs tests (with his staff of one groupie and one disillusioned lumpy hacker) on basic household appliances. And guess what? It turns out that maybe, somehow, he’s created a time machine. But the viewer isn’t sure.

It’s a crazy twisted plot where the mundane can suddenly leap out and bite you in the ass. There are about a dozen characters, strange individuals like the girl who runs a maids’ café to a shrine-girl who is, sadly, “a dude” (revealed, in those dejected words, early on), and a mousy girl who can barely speak but lives through her cell phone. And things slowly twist until you aren’t sure WTF just happened, is happening, and will happen. Other than the last episode or so (where the series runs out of gas and coasts) it is a wonderful storyline, one I’ve watched several times through. 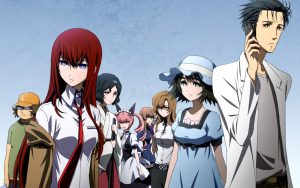 But, it seems, not for everyone.

Had my movie-buddy over the other night and, with my wife, I put this in and ran two episodes (right up to the game-changing banana-in-the-microwave moment). Having seen it before, knowing the plots and back-plots and wrap-around-Mobius-plots, I was all grinning, thinking how wonderful it was. But by the end of the second episode we were in movie-mutiny, with my wife and movie-buddy actually deriding the series as confusing, obtuse and frustrating. In fact, they were critiquing it so much during the second episode that they set up a standing criticism wave. They weren’t watching the movie to understand it. They were turning the plot into a Gordian Knot, not solving it through unraveling, but cutting it with sarcasm.

Hey, their right to be critical of it. Just as it’s my right to use them for blog-fodder.

The point of this is that storytelling doesn’t have to be western-linear. You don’t need to start with an innocent yet admirable hero who gets pressed by circumstances (set in motion by some sneering villain) into running the usual quest-conflict-climax-victory sequence. It doesn’t have to be solved or even explained. Not every story has to be written to casual expectations.

Anyone remember Dirk Gently’s Holistic Detective Agency, where the hero solves the very confusion mystery and then looks at his buddy – they agree they understood what had happen and so there was no reason to go over the whole thing in pointless explanation (leaving the lazy reader to blink and stutter, “What???”). Or No Country for Old Men, with an unexpected twist that shows you just how far a plucky hero can go in a real-world setting. There was even that old Wilber Smith book (apologies for forgetting the title) where you think the hero is a big-game hunter, up until the point 1/3 of the way through where he gets an elephant tusk rammed through his chest. At this point, the storyline hooks over to the unexpected new heroes, a nice transition that makes perfect sense after it happens. Or Lord Foul’s Bain, where the hero is an unlikeable leper.

The point is, with so many sources of writing now, from free-style selfies to desperate-for-attention professional-published, there is no reason that every story must involve a reluctant hero who is thrown into yet another web of intrigue and murder. Heroes don’t need to be traditional and plots don’t need to be linear. You don’t need to follow the same rutted trail carved out since Gilgamesh. You can run tell your tale backwards, you can loop back and reexamine the plot from another POV, you can change genres in mid-stream, you can do whatever you want. If you can sell it, even if you only reach one other human with your story, you’ve made your mark as a writer.

So, please, let’s move beyond The Journey Begins…

>>>HAVING SAID THIS, I’M PRETTY SEQUENTIAL IN MY OWN TALES. BUT FOR INDIGO, MY HERO WAS A CROW SO THAT COUNTS FOR SOMETHING<<<