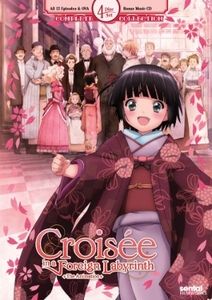 I have a confession.

Japanese Animation goes a lot further in storytelling (sometimes) than Western media. Oftentimes the storylines are unique and different (and sometimes they can be incredibly moribund, too). But there are scenes, as powerful as any book, that I’ll carry with me.

Not in this case.

Croisee in a Foreign Labyrinth is an incredibly sweet story (just like jamming four tablespoons of sugar into your mouth could be). Sometime near the end of the 19th century, a young 13 year old Japanese girl is brought to Paris with plans to use her uniqueness to help the sagging sales of a iron-monger’s sign shop. It was the grandfather’s idea, and the grandson, for all his wanging on iron all day, still has a lot of pent-up shit to deal with. Yune, the young girl, can’t pick up a single thing in the shop without Claude (the grandson) flying into a rage (and then a sulk) for all the memories it unleashes.

I was thinking of the character interplay a few days ago. So, we have an older man (23 or so?) who is ill-tempered, sulky and prone to tantrums. And we have a young Japanese girl, patent, deliberate, who acts as a soundboard for him. Sure, Claude will rant, and then he’ll see Yune’s reaction (perhaps a blush, perhaps a tear) and he’ll grow up just a little bit more.

And that’s interesting, if only because what you would expect would be the opposite, that the child would act childishly, and the adult would act adult. And if the story ran along those lines, it would be nothing special, just another story about a teenage brat thinking the world was unfair and wah, wah, wah.

By turning the roles around (perhaps by accident) the storytellers came up with a more unique story, one that is interesting enough to have us watching to see what happens next between them. And that’s curious, since had I sat down to write this story, I might have been more inclined to write it traditionally (then again, I have written about a 13 year old girl, Elisha of Carthage, in Fire and Bronze, and she turned out to be a pretty clever cookie, too).

And that’s the point here. Perhaps you are setting up characters for a story even now. Of course, you’ll follow stereotypes somewhat, just so the characters aren’t totally alien. And you’ll probably even have a sense of their relationship: who is wise, who is needy, who is clever, and who thoughtful.

Before you type that first line, take just a moment to reconsider your characters. Could you, perhaps, switch them? If you have a master and apprentice, what if the master was ineffective and the apprentice sharp? Or if the captain of a ship hopeless and the midshipman very knowledgeable. Maybe even a mother who cannot run her life and a child who can? There are a lot of switches to consider.

Maybe your story will really turn into something if you break from the usual character types. So flip them, if only in your mind, and see what comes from it.

>>>IF YOU ARE INTERESTED IN FIRE AND BRONZE, AS MENTIONED ABOVE, YOU CAN GET IT HERE, ALONG WITH MY OTHER BOOKS!<<<