t’s eleven at night. I’m driving home after eight hours of work, an hour’s commuting, two hours of dinner with the buddies and then three hours of model train operations. And now I need to blog about the latter.

To define – model train operation is where a group of train enthusiasts use their layout to simulate how a real railroad operates. There is a dispatcher controlling things by phones from a remote office. There is a yardmaster sorting inbound cuts to locals, and outbound strings for export. And there are the train crews, dozens of guys running freight, passenger and local trains, following switchlists, timetables and transmitted warrants to move hundreds of train cars from one end of our 40×60 layout to the other. It’s the great game, the largest and most complex cooperative effort you will ever be a part of. And it’s a load of fun.

And I always blog it.

Been doing this for years. Right after the session, no matter how tired I am, I log in and blog out, capturing the flavor of railroading and the humor of the debacles. Of course, in the latter, I can’t be too snarky. Some people go home saddened that they screwed up (the one time I got myself “killed” on a railroad, I was bummed for a week). So there is a fine balance between breathless-tabloidalsim and kind chiding. In some remarkable bonehead cases, I’ll skip it entirely.

Usually while I’m driving, I’m thinking how I want to break it. Will it be a cab-viewpoint recount of some interesting meet or event that I was part of, told in full fictionalization mode? Or will I step back and talk about the hobby from the 10,000 foot level? Or perhaps a discussion of an aspect of railroading I hadn’t considered until this session. All I know is that it has to be fresh and new and interesting and dynamic. I know that eventually all the guys will be reading it so I want to make it worth their while.

It’s funny – my blogging has actually become part of the session. People joke about what I’ll be blogging about. If a crew misspots a car or ends up on a wrong track, you’ll hear the quip “Looks like I made the blog!” I do remember one night where a cub dispatcher went through the wringer – he just couldn’t keep up with the demand of crews for warrants. End of the night, I’m rolling my last train home to Martin Yard on the authority of the final warrant and he comes out, white as a sheet. “I’m in the blog, right?” he weakly asked.

From a writer’s perspective, this is good training. Often writers are forced by deadlines to generate prose when they are tired and burned out. Some of the greatest literary works were pushed out to meet rabid publishing demands. Writers don’t always get to roll out of bed and sit before their computers, preparing to work with a fresh perspective a full night’s sleep affords. No, often it’s late, a deadline is looming and they need to produce NOW!

So for you out there playing at writing, get ready for long stretches of bleary-eyed creativity. It’s what this profession is about.

And BTW, the reason I wrote this is because I had a session yesterday. You can read about it HERE.

>>>OR IF YOU WANT TO SEE WHAT BOOKS I’VE PRODUCED OVER THE YEARS, YOU CAN SEE IT HERE!<<< 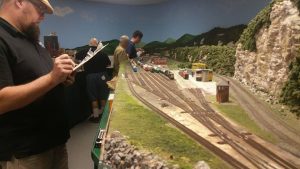